I have decided to run the Paris Marathon in April 2016, what have I let myself in for!

I will be raising money for Macmillan Cancer Support, aiming to reach a target of £1000. Luckily, working as a Reindeer Herder is fantastic fitness training….running around the mountains looking for free-ranging reindeer, carrying feed up the hill, running after non-conforming reindeer!….. and the years of ‘compulsory’ hill-running, prompted by Alan Smith, are going to set me in good stead, I hope! However, I still definitely need to train in long distances and having someone to run with always helps with motivation… and here are some of my eager running partners: 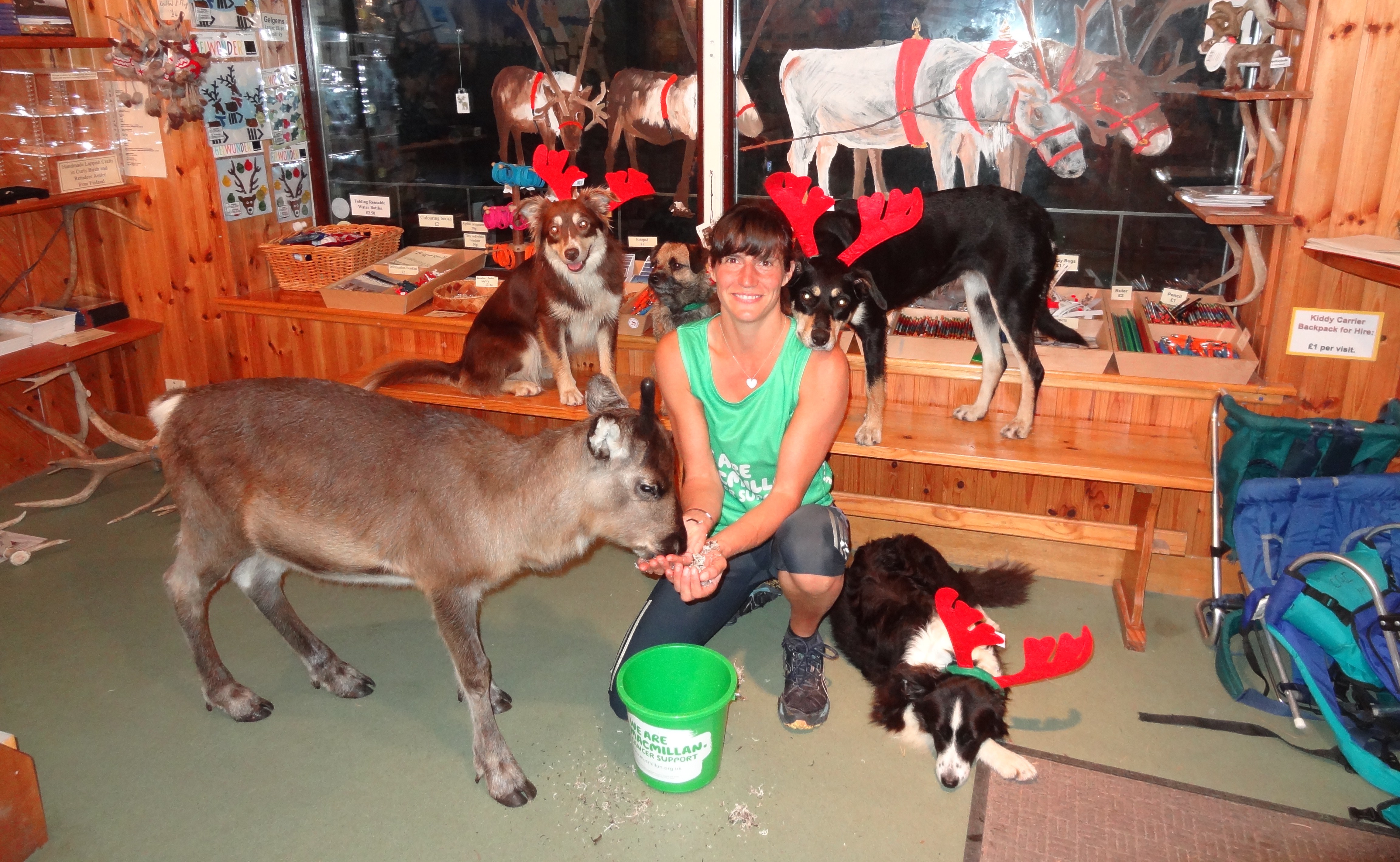 All the Reindeer House dogs… Tiree, Moskki, Tip, Sookie and Murdo (not pictured… off eating something no doubt!)… they never say no to a run… and of course Fergus!

Fergus offering some training tips from his months of running experience!

I chose to run for Macmillan as cancer seems to affect so many of us these days, whether directly or indirectly through friends or family. I am running the Marathon with one of my best friends, Ailsa, who hasn’t as much running experience as me but as she lost a friend recently to cancer she has been motivated to give it a go and I think it’s really brave of her so want to support her and raise money for a great cause. Macmillan nurses provide amazing support to people who are fighting cancer and their work is invaluable.

Fergus is providing fundraising support! I did try to persuade him to come to Paris too but he says he prefers the hills to the cities! 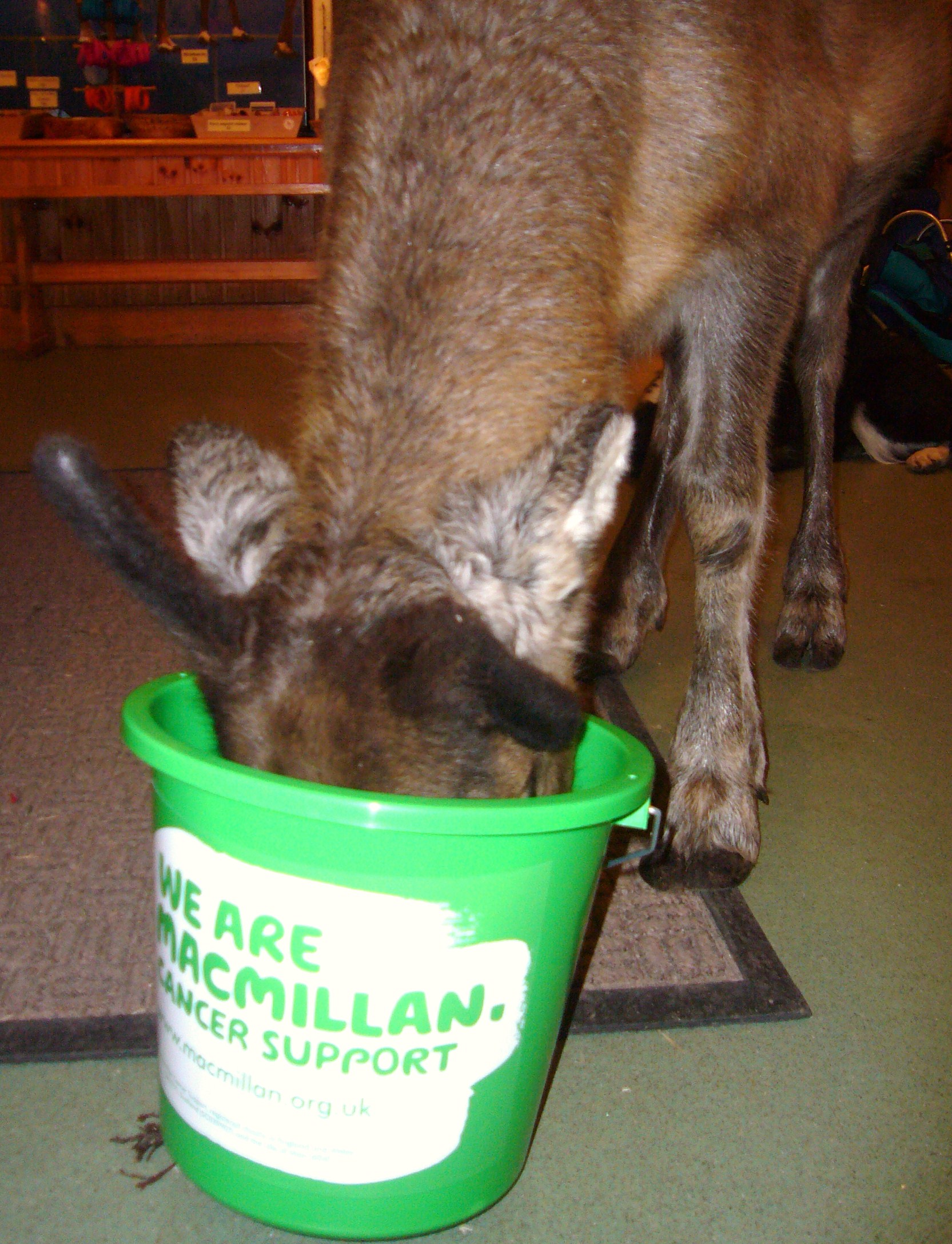 Fergus counting the donations so far…

If you would like to support me please donate by going to:

Thanks and wish me luck!
Mel

We’re pleased to tell you about an exhibition we’re helping to host up here in Glenmore.

Life in the snow forests: 100-year-old photographs displayed for the first time

Indigenous people from the snow forests of Inner Mongolia and Siberia have been reunited with century-old photographs of their family and communities as part of a research project and exhibition at the University of Cambridge.

Previously unseen photographs capturing life in a remote corner of the world a hundred years ago will now be displayed in Glenmore, following the River Stars Reindeer first unveiling at the Museum of Archaeology and Anthropology, Cambridge.

The photographs record the indigenous Evenki and Orochen communities and were made by Russian ethnographer Sergei Shirokogoroff and his wife Elizabeth between 1912-1917, and by Cambridge graduate Ethel Lindgren and her husband, Oscar Mamen, between 1929-1932.

The exhibition, was the culmination of a painstaking curatorial process, which involved choosing 70 images from more than 26,000 photographs. A process further complicated by the research team coming from ten different institutes located in three different countries.

One of the curators of the Cambridge exhibition, Jocelyne Dudding said: “This is a unique opportunity to see the very best of their images together for the very first time. The photographs are not only a wonderful record of the ways of life for Evenki and Orochen, but they also speak of the more personal stories behind every image.

“Each photograph tells many, many different stories about the lives of the people, the clothes they wore, the animals they raised and the places they called home.

The conversations Dudding and her fellow researchers from Aberdeen, St Petersburg and Hohhot had with the indigenous communities directly influenced the selection process for the exhibition. As the project developed and word spread, more and more communities from other areas came forward and asked to be included.

“River Stars Reindeer comes about from a digital sharing project to reunite Evenki and Orochen communities with their photographs, and thereby their histories and their cultural heritage,” added Dudding. “We are now in the process of digitally sharing our photographs with them – having spent the last 18 months digitising 16,000 images so far.

The exhibition title River Stars Reindeer speaks of the cosmologies and realities of the lives of Evenkis and Orochens in an area known as the three rivers region.

Many of the photographs to be displayed at the exhibition were gathered by anthropologist Dr Ethel Lindgren and photographer Oscar Mamen. Lindgren went on to continue her studies and immersion with reindeer husbandry and in later years married her second husband Mikel Utsi, Swedish Sami reindeer herder. In 1952 Lindgren and Utsi successfully re-introduced reindeer to Scotland. The Cairngorm Reindeer Herd still thrive today and exist freely within the Cairngorm mountains.

River Stars Reindeers exhibition runs from 26 November 2015 until 3 January 2016 and will be displayed at Glenmore Visitor Centre. The exhibition is on loan from the Museum of Archaeology and Anthropology, Cambridge where it has recently been shown.

Whilst our reindeer spend the vast majority of the year leading a very relaxed life out on the Cairngorm mountains, for the six weeks running up to Christmas, some of our full-grown adult males and six-month-old calves take it in turns to join in Christmas events across the country. These events serve several purposes: spreading the word and educating people about the reindeer, raising vital funds to sustain the herd through the coming year, and of course spreading some festive cheer, especially to those who are unable to make it up to see the herd at home.

Of course taking up to eight teams of six reindeer away on tour requires just a bit of preparation. Or rather, a lot of preparation. Poor Fiona deals with all of the paperwork and logistics, starting in January (it’s always Christmas for her!), whilst Tilly is the queen of organising the rest of us into helping her sort out the physical kit required. In October, most of the team end up spending a day or two at the farm, helping to scrub, sort, varnish, count and clean the various bowls, head collars, harness, ropes, boxes and sleighs, and to mix numerous bags of feed.

Our specially designed “boxes” which the reindeer travel in, similar to a large horse box but with additional room for a sleigh, also have to be taken out of storage and painted, cleaned and bedded down ready for the first trip of the year.

All in all, it’s a lot of work, but meeting so many excited and delighted people out on tour with our beautiful reindeer makes it all worthwhile!

A few weekends ago a selection of our beautiful reindeer were invited to a wedding, with a special request for the lovely Fergus (the wee calf we are currently hand rearing). Along with Fergus we took four of our Christmas reindeer; Moose (an old hand at pulling the sleigh and wearing bells and harness), Svalbard (a rather small and stocky but very handsome reindeer aptly named after the reindeer from the island of Svalbard who are much smaller than their Scottish cousins), Monty and Duke (two of our three year olds who have recently become Christmas reindeer this year and will be trained to pull the sleigh and go out on tour with Father Christmas this winter, both are very handsome reindeer with lovely big antlers).

First we took the boys out of the Brenda (our fondly named livestock lorry) and gave them a good bit of lichen. This bribe allowed us to slip the harness and bells onto the boys, who barely batted an eye lid. Having worn harness for many years Moose was the perfect role model for Svalbard who has only done one Christmas season and Duke and Monty who have never worn bells before but behaved themselves fantastically. Fergus has always followed us like a little lamb and jumped in the back of our van, so I think his nose was a put a bit out of joint when he had to wear a halter and travel in the reindeer lorry with the other reindeer (instead of in with the herders and dogs).

Once the ceremony was finished the wedding party and guests came out to meet the reindeer, all of them posed fantastically for photos and Fergus charmed everybody with his cheeky personality.

All in all a fantastic afternoon was had by everybody. The boys behaved themselves wonderfully and had a little practice for the madness that is Christmas. I think after a bit of sleigh training for Duke and Monty, they will all be ready in time to pull Santa’s sleigh all over the country. The real question is will we be?