At the moment we do our hill trips with our free ranging females that are roaming around the Cairngorms. As the word free ranging suggests, they are free to go as far as they like. This also means that, if we want to have a trip that doesn’t take up the whole day and that is doable for most people, every morning we have to convince the reindeer to come to an area that is easily accessible.

For this reason, we set off first thing in the morning with 2 members of staff to go and find them and to lead them nearer to a carpark. We usually have a rough idea of the area where the reindeer are from the day before. However, reindeer walk at a rapid pace and could move from one place to another in a short timespan, so this often involves some sort of search. Besides that, they are often quite far out, and as reindeer like to go uphill, so must we in the early morning. When we then finally find the herd, it can take some time to convince them to go down the hill with us. That’s where some reindeer come in very handy: the greedy ones. We will have a wee bag of handfeed, and, knowing if they get to us first they will get a handful, there are always a few that are on their feet right away to follow us. And as the Dutch like to say: ‘if one sheep crosses the dam, the others will follow’ – only it’s reindeer. And they don’t cross a dam, they go down a hill. Anyhow. By having a handful of reindeer interested in following us, we are usually able to get the whole herd on their feet and get them to follow us to a nice spot before the 11am visit arrives. Without greedy reindeer our lives would be a lot more difficult!  Thanks Okapi, Fly, Lace, Lulu, Sika, Ibex, Jaffa, and all of the other ones I might have forgotten here!

Last week we had a brief thaw of the snow, it’s an awful lot harder to spot the reindeer! The first few photos show how well they blend in with their surroundings in these conditions. Luckily they don’t hide and come running for food whenever we call them and they can hear us, as politely demonstrate here ?. Enjoy some photos of our freeranging herd! 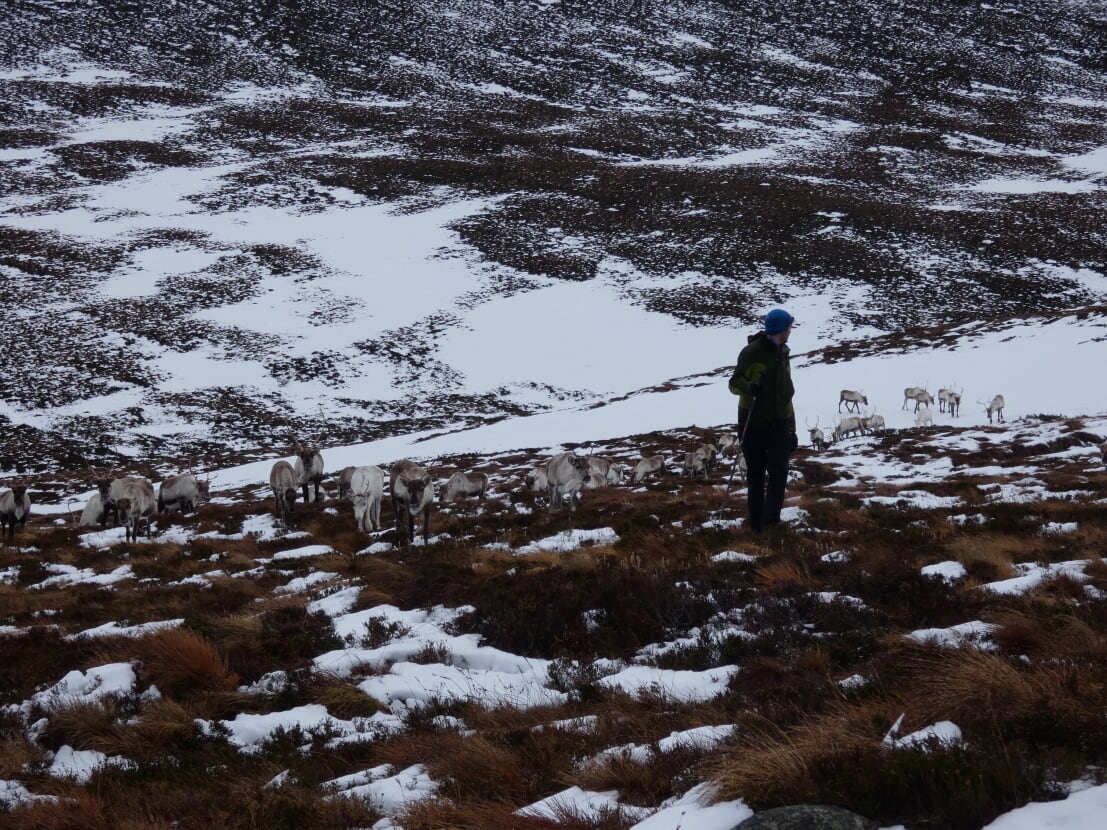 Hen noticed the other day that we were fast approaching our 200th blog milestone, so thought we’d better mark the occasion!

We started blogging in April 2015 – we’d taken part in a Digital Marketing course for local businesses and one of the pieces of advice is that doing a regular blog can help build a connection with people who are interested in what you do. We thought we’d better give it a go, and somehow (sometimes by the skin of our teeth) we have managed to post a blog every Friday without fail since – the “schedule” function means that we’ve even covered Christmas Day and New Year’s day.

Whilst everyone one here is asked to contribute blogs, we have one herder in charge of making sure one is posted at the correct time, complete with pretty pictures and hopefully with spelling mistakes removed! As it was my “idea” (as I’m reminded bitterly at times…) I took this role for the first year or so, before passing on to Imogen. Imogen certainly had the most luck getting blogs written – we’re all a bit scared of her and when she cornered you and said it was overdue, you’d drop whatever you were doing to get typing! When Imogen moved on, she passed over to Morna, who has now relinquished the title to Chris. Chris goes for public shaming in his efforts to get blogs produced – a list materializes on the office door with everyone’s name and promises of rewards for the first person to get their name crossed off, and punishment for the last one…

We try to cover lots of aspects of reindeer, seasonal life here with the herd, funny stories, and general nice photos that give you a taste of what’s going on. Our first blog featured Esme’s impromptu journey in the back of the van, later that year we looked at the traumatic calving bet, and volunteer Emm wrote about her experiences with the herd and how they’ve helped her. We’ve covered some educational topics, looking at how reindeer change in appearance throughout the year, reindeer of the Southern Hemisphere, and antler stripping (steady!). We’ve focused on the local wildlife, our dogs, and the geology of the Cairngorms. We admit that sometimes when we run out of time, we plump for photo blogs: in the wild winter, free-ranging or the new calves.

So we hope this may inspire you to have a look through our “back catalogue” of blogs. We do have to apologise that some are missing their photos after we migrated our website to a new server last year, but hopefully it gives you some reading material. If there is just one blog you look back at, we can recommend this one for a laugh…

One of the most common questions I’ve been asked over the years is how long do reindeer live? I’ve always answered about 12-14 years on average, but a conversation with Dave earlier today in the office got me thinking about the topic.

The askers of the question tend to be surprised by the answer, expecting the reindeer’s lifespan to be more in the region of a horse’s, say 25 to 30 years. But (very much as a generalisation) in the animal kingdom, the larger the animal the longer they tend to live, and reindeer are considerably smaller in body size than a horse, or indeed even a small pony, an adult weighing only between 100 – 150kg.

Female reindeer in our herd tend to live a little longer on average than males, and looking at the herd list on the office wall here, currently indeed 9 out of the oldest 11 reindeer in the herd are female. In a totally wild situation this may be due to the stress the rutting season puts on a bull’s body each year, during which they can lose a third of their body weight, subsequently going into the hard winter months in much poorer body condition than the cows. Year on year this annual loss of condition really takes its toll. But our males are mostly castrated as 3 year olds, meaning they take no part in the rutting season and remain fat right into, and in an easy winter, right through to the spring. So I don’t really know what their excuse is, but there is certainly a noticeable difference in the average age of our males and females!

After Dave and I’s conversation, we’ve come to the conclusion that it may be more realistic to state 12-14 as the average age for a female reindeer, but perhaps more like 10 -12 for a male. Maybe we’ll settle for 12 overall to cover all bases. It’s worth noting that some reindeer in permanent captivity may have longer lifespans as they have very little environmental stresses on their bodies, with food provided all year around and shelter from the elements. A reindeer named Valeska reached 21 at the Highland Wildlife Park, just 10 miles down the road from us. Valeska was actually owned by us, back in the day when we used to very occasionally send reindeer from our herd to live elsewhere. We’re talking 30+ years ago though, and don’t do this anymore.

The harsh fact is that the vast majority of captive reindeer, however, in fact have much, much shorter lifespans brought about by incorrect diet, climate and lifestyle, but that’s another matter entirely and beside the point for this blog. Our reindeer, while pampered to some extent, do live as natural a lifestyle as we can possibly provide for much of the year, and have to cope with the rigours of life in a sub-arctic habitat and climate – the Cairngorms in the grip of a winter storm is not a friendly environment to any animal. Staying alive in -30°C in howling winds when your grazing is concealed under hard-packed snow and ice, for days at a time, obviously uses a lot of precious energy and vital body reserves.

Until last year, 18 was the record age in our herd here for any reindeer, achieved by females Trout and Tuna in 2002. The oldest male was Scapa, who got to 17. But Trout and Tuna’s record was finally beaten last year by Lilac, who certainly reached 19. We last saw her a week after her birthday, still looking great out free-ranging a couple of miles away, but we don’t know the exact date of her passing.  An early retirement from motherhood (Monopoly was her final calf, at age 12) no doubt added to her longevity, as did her sheer bloody-mindedness! Lilac lived her life exactly as she wanted, and quite often where she wanted too – which was not always in concurrence with us. Her backside, disappearing over the nearest horizon in the opposite direction from the rest of the herd, became a common sight over the years.

So, who are the geriatric members of the herd today? The oldest of all is actually a male, one of our 2004 import of Swedes, Addjá, who is nearly 17, and has always had a squint nose. Most of you will be more familiar with Boris, our squinty nosed 6 year old, but Addjá was the original ‘ugly’ reindeer in the herd. Hot on his heels are Cailin and Fonn: females who are approaching 16 (Fonn being the older by two days), and then there are females Malawi (13); Lulu, Santana, Joni, Blondie, Enya and Dixie (all 12), and male Elvis (12). Age isn’t everything though, and reindeer have such varying characters than some can go on for donkey’s years without ever seeming to really make themselves known (looking at you, Joni), while others make a huge impact even before they’ve reached a year old (stand up and take a bow, Dr Seuss…!). But perhaps that’s the beauty of working on a daily basis with a herd of 150 animals.