When people think of reindeer, they inevitably picture them with a big set of antlers atop their furry heads. Unlike other deer species, this even applies to females, who are the only deer species to routinely grow a lovely pair of bony protrusions each year, in order to help them hold a high enough status within the herd to gain enough access to feed in harsh climates.

Only… some reindeer don’t grow antlers. The official term for this is “polled”. We’ve had a number of individuals over the history of our herd (and this is the case worldwide too) who, year after year, maintain the smooth top to their head, whilst reindeer all around them are tapping away to encourage the velvety growths which finally turn into hard bone at the end of each summer.

This is almost always seen just in females (cows), and when scientists have studied reindeer and caribou herds across the herd it seems that between 0.5 and 5% of cows can be expected to not grow antlers. Why would this be? Antlers are used as weapons when fighting for dominance within the herd – indeed a cow with large antlers is rarely challenged. So surely not having antlers is a disadvantage? On the surface, yes, but by not growing antlers a huge amount of energy is conserved every single year. In some habitats, like the thick forests that forest reindeer and woodland caribou live in, antlers can be a hindrance, and the smaller herd sizes perhaps mean there is less of a need to compete. Antlers are more important for a male in terms of breeding success, as a bull with just one or no antlers at all is unlikely to have the chance to breed.

There seem to be two factors behind refusal to grow antlers. First, there is nutrition. A reindeer who is struggling to find enough food will prioritise body condition over antler size – an adult who is having an unexpected hard year will grow smaller antlers than usual. If this happens to a calf – for example one who is orphaned at a young age, they may not have any antler growth at all in their first year, or perhaps for longer. Our wee reindeer Diddly had a difficult start as her mum Flake didn’t have any milk, and whilst we bottle fed her, we couldn’t match the nutrition reindeer milk would have provided. Perhaps this was the reason she didn’t grow antlers?

The other factor is genetics – as we trace all of the family history of the members of our herd, we can often trace lack of antlers back to an ancestor. It seems to be that the polled characteristic is a recessive one, often carried but only expressed if a calf inherits two copies of the gene. I was interested to find this note when looking back through old diaries from the early days of our herd: 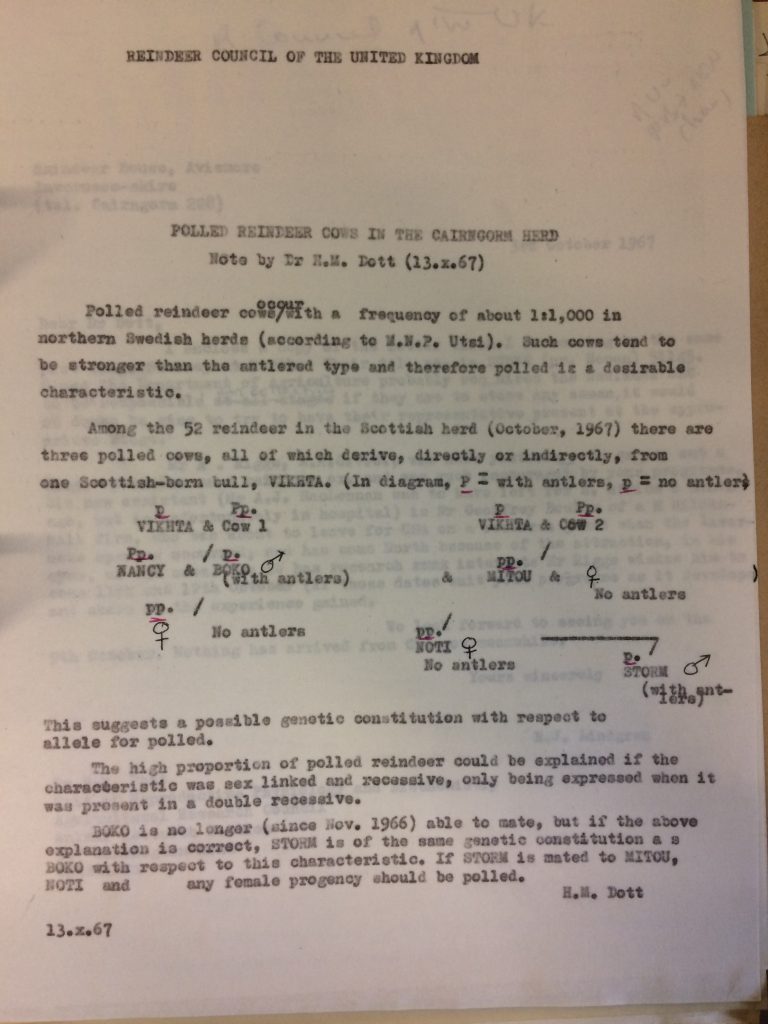 So for Mr Utsi, who founded our herd, polled (antlerless) reindeer were a desirable animal, and I also feel that antlerless females tend to be strong characters – perhaps because they’ve had to hold their own in an antlered world?? As our reindeer have a pretty easy life and we supplement their grazing in winter with feed, any antlerless cows tend to be that way because of their genetics rather than a lack of nutrition, and perhaps with plenty of food available there is no huge detriment to their diet if they happen to be a little further down the pecking order.

Arnish, one of the leaders of the herd when I started work as a herder, never grew an antler in her life, but was well respected among the other reindeer – if challenged she would simply use her front feet in place of antlers! She was also a successful mother, rearing Addax, Jaffa and Svalbard. Jaffa’s daughter Brimick only grew one antler. We also have one-antlered reindeer Dixie in the herd, who inherited this trait from grandmother Cherry.

Ferrari didn’t grow antlers at all until she was nine, then surprised everyone by growing one antler annually (on the same side!) until the end of her days. Interestingly, she’s a direct descendant of polled cow Mitou (mentioned above). From her descendants, her grand-daughter Malawi is in the herd today and has been antlerless so far – she’s currently fifteen so I think she’ll probably not start now! Ferrari’s great-grandson Merrick was also the only male we’ve had yet who grew just one antler, after growing nothing as a calf.

And what about wee Bond, some of you who follow our stories closely may ask. As an orphaned calf, he grew no antlers at all (caused presumably by struggling to get enough nutrition), then last year as a yearling he tapped furiously away at his pedicles (where the antlers grow from) and managed about 1 inch of antler on one side (you had to peer pretty closely to see it!). You’ll have to wait to find out what happens this year…