Hi my name is Alison (Ali) and I’ve been asked to write a blog.  To be honest I’m not really sure what a blog even is so I’ll do my best (or worst) first blog.  So I might as well start from the very beginning.

I am a new reindeer herder at the centre and I have never worked with animals before in my life.  I gained my job apparently as I was good with people (the hard bit) and the reindeer bit I can easily learn.  Reindeer are fascinating animals and I have certainly learnt a lot about them since my first close up encounter with them.

My interview involved trudging up a snowy mountain, thigh deep snow in places, looking for a herd of reindeer in the mist.  What a magical moment finding the herd at the top of that hill.

While herding them down we reached a large patch of snow, I was amazed to have 45+ reindeer charging past either side of me, it was as if it they were dancing in delight with legs moving in crazy directions.  This happened each time we reached a large patch of snow.    On one occasion one of the yearlings was so excited he started running in circles as the rest of the herd had confused expressions trying to decide if they should follow him or not.  I remember thinking even if I don’t get the job this experience alone will be a fantastic memory that will stick with me forever.  Luckily I got the job and have had many more tales to tell.

Whilst wondering what to write about, I happened to flick back through some of our old photos, and Lilibet’s familiar face made me smile, so I thought I’d talk a little about her, as she was such a character in the herd.

Lilibet was born in 2002, to mum Glacier, one of the lightest coloured reindeer in the herd. As a young calf, she was brown in colour with a white forehead, which suggested she would turn white as she grew into her adult coat. White reindeer are relatively unusual in our herd, but Lilibet was a proper chip off the old block, and almost the spitting image of her mum. Glacier was a very friendly reindeer and taught her calves to be the same – usually when youngsters see mum marching determinedly towards humans and their bags of feed, they follow suit! Glacier had many calves over the course of her life, several of which were white, and one of which, Blondie, is pure white (leucistic) with blue eyes. 2002 was our 50th anniversary, and it was also the Queen’s golden jubilee, so Lilibet was named with the Queen’s nickname.

Lilibet went on to have several calves of her own, and has also passed on the “white” genetics to her own calves. Oryx was born in 2008, in the theme of “antlered and horned animals” and was light coloured with a pure white face. He was the first of a trend for Lilibet’s calves – we try to make links with mothers where possible to help us remember who’s related to who – so all of Lilibet’s calves ended up beginning with the letter “O”. Light coloured Oreo and Origami followed in 2009 and 2011 respectively, but then there was a surprise in 2012 when her calf, Olympic, was one of the darkest of the year! He was the dark sheep of the family so to speak, but is a very lovely fellow!

Lilibet was always a character within the free-ranging herd, a real friendly face who was delighted to see us (well, the food bag anyway) and very dependable in following along to where you wanted the herd. She had a knack of worming her nose into the feed sack and proving incredibly difficult to extract!

As is the case with many of our lovely old females, Lili passed away out on the high tops over summer at the ripe old age of 14. It feels like the right way for them to go, in their natural habitat on the hills that they know so well. She’d been a wonderful member of the herd and her legacy lives on with her sons Oryx, Origami and Olympic still entertaining us with their great natures.

For the previous few months we have been joined by a new reindeer herder called Kate who helped us out over the busy calving period. Kate was so brilliant to have around we asked her to stay a little longer until some of our regular summer staff returned through June and July. We expect to have her back at some point in the near future, but for now she has headed off to enjoy some summer wanderings. Before she left Kate wrote some lovely short stories about her time herewith some excellent drawings. Keep an eye out over summer for the next installments of her stories. Hopefully we can have Kate back here at Reindeer House in the autumn!

First day on the job – Lost in the fog

During the first hour as a reindeer herder I had managed to become a very soggy, panting mess who was lost in the fog somewhere on windy ridge with not the foggiest where the herd had gone. I remembered thinking to myself; this has gone terribly wrong- I’m not even going to make it through the first day!

It was mid-April and there were still patches of snow on the hills. My first sighting of the reindeer was brilliant, the whole free range of females were running towards us as we walked over a brow of a hill. It was an amazing sight, and one I won’t forget in a hurry, the reindeer looked beautiful and majestic in full winter white coats and impressive antlers. I was marvelling at what a lovely greeting we got, but Mel pointed out they probably came our way being spooked by something from the opposite direction. Then off we went, it was Mel leading the herd to the lower levels and me bringing u the rear, but unlike the agile reindeer that excitedly skip, gliding over the snow patches I ran behind panting and sank straight into a snow hole (Vicar of Dibley style). Up on my feet again I was wondering how on earth I was to keep up with these four legged creatures when 5 of them decided to go in the opposite direction. Standing in the middle of the groups, I thought I can’t lose reindeer on my first mission and went gallivanting after the strays. Of course being a herd animal , it really says it all , and the wanderers then did a full circle galloping off to join the rest, leaving myself lost in the fog. Luckily it wasn’t long until I found the herd again and the rest of the first day went more smoothly. 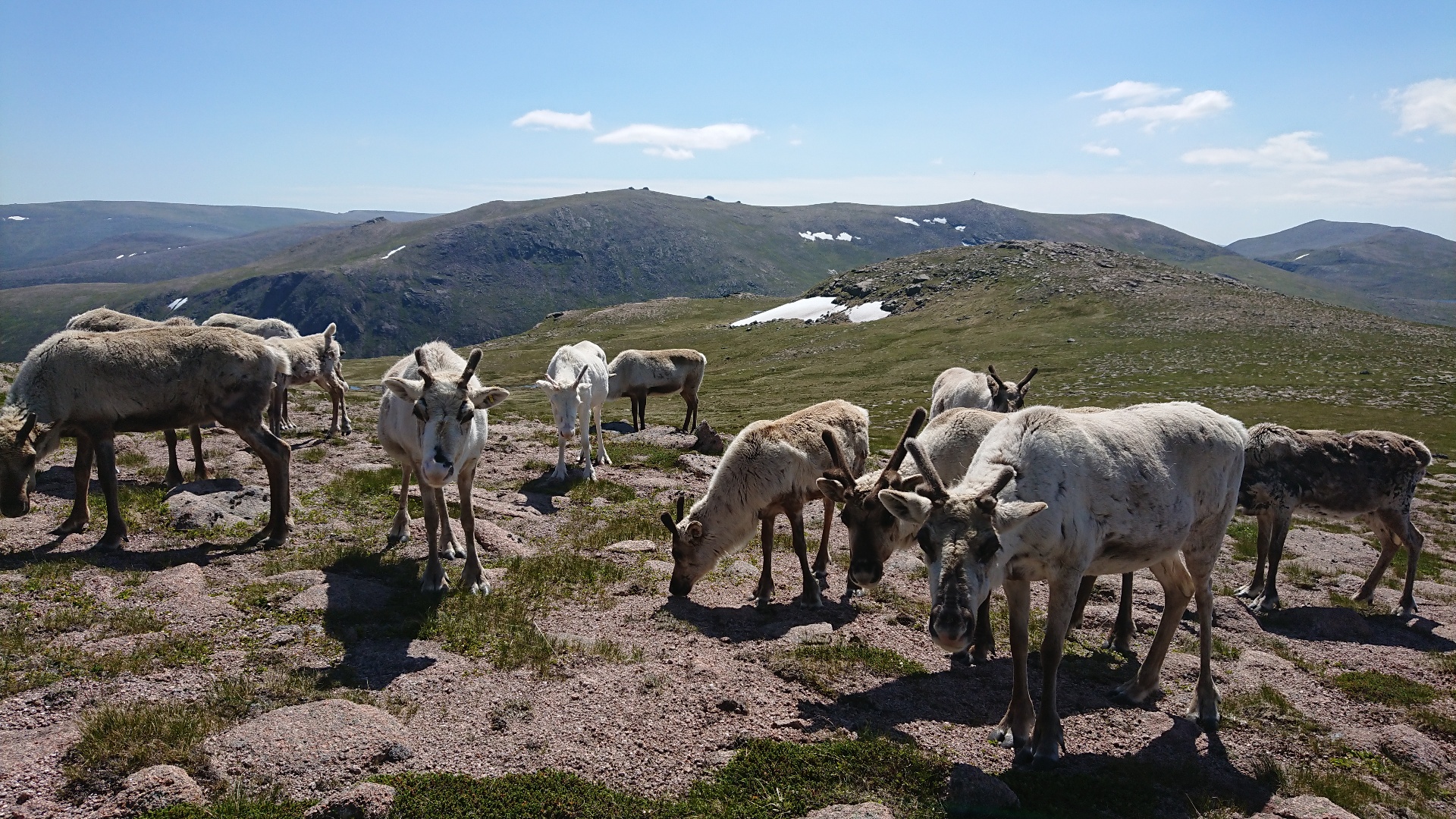