After all summer wandering out on the free range, the females come back to the enclosure and we check them and separate who we need for the rut and who can go back out. This year, three of the girls going back out were Sambar, Okapi, and Cailin. They have been known to return occasionally, and this is the story of one time where the toublesome trio turned up almost daily and would be outside the enclosure and need to be pushed out..

Morna and I had just finished the hill trip and were checking the reindeer in the other enclosures, where there were bulls and cows.

Okapi, Sambar, and Cailin had waited outside the gate used their big brown eyes and fluttered their eyelashes to trick an unsuspecting visitor to let them in, much to Bandy’s delight. We separated them and pushed them back out on the hill.

Hen, Andi, and myself  checked the roads in the morning as we always do, and found Okapi and Cailin standing at the side of the road staring down in to the enclosure like a golden eagle on a levrit, scheeming.  Sambar was found the day before alone outside the enclosure and so we took her in until we could find her some company out on the free range. Maybe they were scheeming, taking turns going in to the enclosure a day at a time! So we lead the two girls into the enclosure, reunited them with Sambar, and once again pushed them out.

RTC (reindeer traffic control) were called out as the troublesome trio were causing a blockage on the Cairngorm road. Morna and I headed out to move them, and after a small discussion of the question we seem to be asking a lot recently “take them up or down?”, we moved them up on to windy-ridge. There was a glimmer of hope as they walked over the summit, that they were finally heading into the hills.

The three girls are once again found below Cairngorm road and I volunteered to take them out to ‘the flats’ (that is the plateau area below the northern corries) and I was determined to take them out where they wouldn’t come back. I had a bucket of feed, wellies and flat cap, but unfortunately no gloves, which I soon regretted as my hands felt as if they were being pierced by shards of dry ice. We walked through a glen, over a river, dodged the bogs (which are always deeper than your wellies). Eventually I stumbled onto a deer track that was poached with Roe deer, Red deer, and now Reindeer tracks. We eventually stopped at the base of Lurcher’s crag, I scaned my surroundings to see if there was a road, footpaths or anything else nearby where the reindeer could be a nuisance. But we were enclosed by the over-towering hills. I gave them some feed and after a one-to-one with them about why they should head in to the hills, I headed back.

“I hope that’s the last I see of them for a while”, I thought to myself as I left…… but I doubt it!

Each year all the calves are named in September after spending the first four months of their lives free-ranging in the Cairngorms. Every year we select a theme to name the calves by. In 2011 the theme was “Games and Past Times”; as a result we have Scrabble, Rubiks, Rummy, Origami, Monopoly, Puzzle and Jenga amongst others.

However, as with any rule there is always an exception and Svalbard, also born in 2011, is the odd one out for that year!

Svalbard is currently in our Hill Enclosure here in the Cairngorms and, because of his large white nose (not to mention his fondness for food), he often stands out leading visitors on our Hill Trips to ask what his name is. This has prompted me to answer the question, why is Svalbard, called Svalbard?!

The Svalbard archipelago of Norway is found in the Arctic Ocean north of mainland Europe, approximately halfway between Norway and the North Pole.

Svalbard is an incredibly wild place with a land area of 61,022 km2 and a human population of only around 2700 (for comparison Scotland’s land area is 77,933 km2). Approximately 60% of the archipelago is covered with glaciers! The islands are home to only a few species of mammal which include polar bear, Arctic fox and its own subspecies of reindeer, called the Svalbard reindeer (Rangifer tarandus platyrhynchus).

The Svalbard reindeer has inhabited this harsh wilderness, and has been geographically isolated from other reindeer for over 5000 years. As a result they have become very well adapted to the particular landscape and roam on nearly all non-glaciated areas of the archipelago. The Svalbard reindeer wins the award for being the most northerly living herbivore mammal in the world!

The Svalbard reindeer is the smallest subspecies of all reindeer and caribou. Bulls average 65-90kg in weight, and cows between 53-70kg compared with our Cairngorm reindeer where bulls can weigh 150kg. Svalbard reindeer are very distinctive for having short faces and short legs, making them appear ‘dumpy’. They also have a very think, long winter coat. The long coat also contributes to their short-legged appearance and even starved individuals can appear fat in the winter!

Svalbard reindeer may make short altitudinal movements, or slightly longer inter-island journeys across the sea ice but they are mostly sedentary and therefore have low energy demands. The lack of migration could be a reason why they have evolved short legs, also helping them have conserve heat with a smaller surface area.

However, don’t let their short legs deceive you! They can reach speeds of up to 60 km an hour on a good running surface, giving them the ability to out run a polar bear, the only predator they face on Svalbard (apart from man).

Unlike the majority of Reindeer on the Norwegian mainland the Svalbard Reindeer have not been domesticated, and also do not live in large herds but tend to be solitary or stay in small groups.

I’m digressing, so back to our Scottish Svalbard…

Svalbard was born on the free-range in May 2011 to Arnish, as a result his exact birthday is unknown. Arnish and young Svalbard were not seen between July and October that year, until Svalbard turned up by himself  in October at the Hill Enclosure, without his mother, who was sadly not seen again.

When this orphaned calf turned up, he was given a name according to the theme for that year. But the herders at the time kept commenting on how dumpy and short-legged he was; as a result he was quickly nick-named “the Svalbard reindeer”. Before too long, the name stuck and he’s been Svalbard ever since! Thankfully for him, he lost his stocky proportions and we now have a handsome reindeer with a big personally!

This whole blog was basically an excuse to show some cute photographs of a young Svalbard (and to research a future holiday destination!) so here come the pictures… 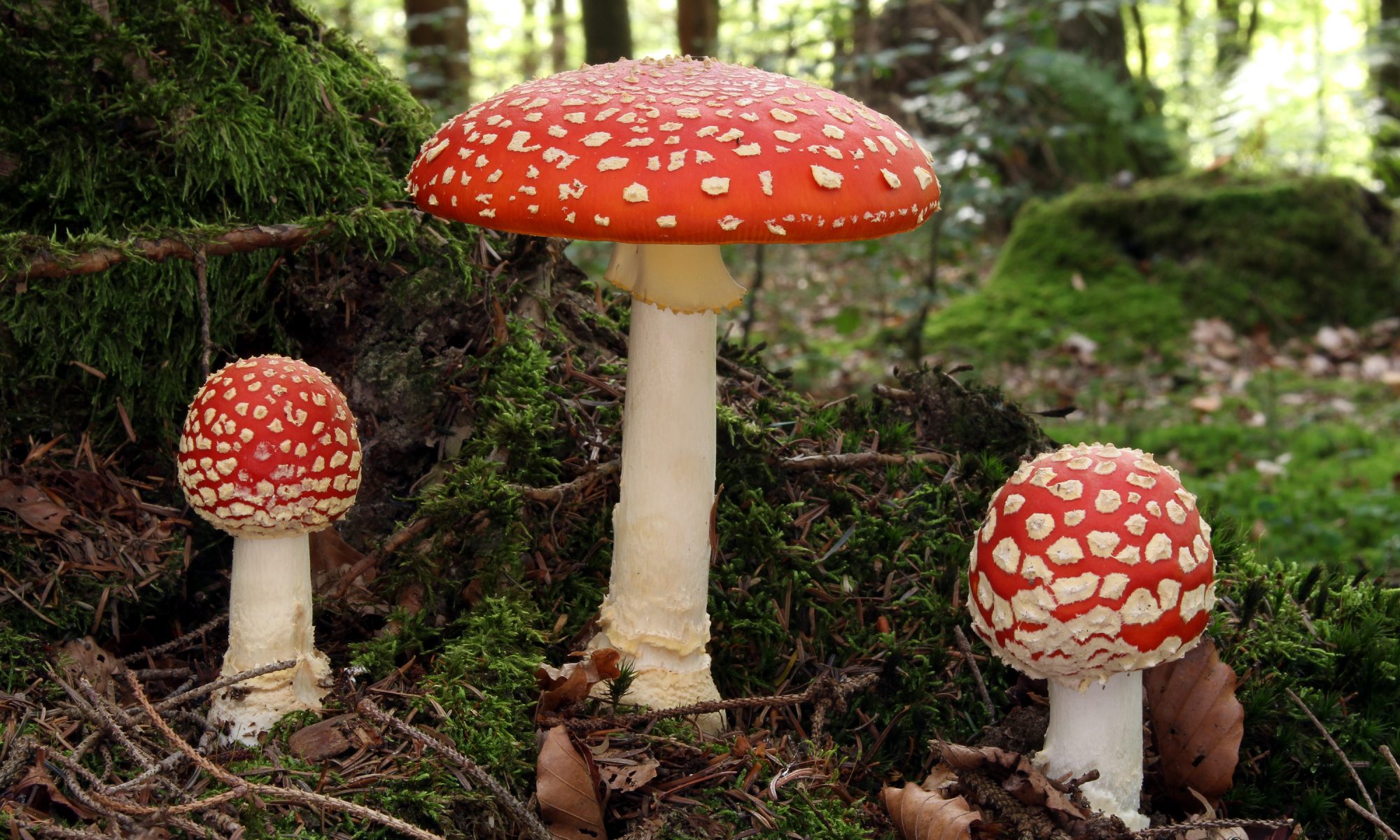 Reindeer can eat mushrooms that are poisonous to us, and will even seek them out. They have a trick to this that is shared by many other ruminants – having four stomachs and a specialised form of digestion.

This incredible process means that the microorganisms living in the stomach deal with all the mushroom poisons, and the reindeer gets off scot free. It also means that reindeer can live off of lichen over the winter, when no other food is available, giving them a big advantage over other animals.

So with the poisons all gone, the reindeer is free to enjoy the mushroom (and any of its other properties!). One of their favourites is the Fly Agaric, the traditional ‘Christmas mushroom’, with its red cap and white spots, and hallucinogenic chemicals. This we believe is sometimes the culprit for any missing reindeer that we find later on in the day, sleeping soundly beside a pile of chewed stems!

All silent on the hill – just the wind, maybe a raven overhead. Then, in amongst the herd, surrounded by soft clicking as the reindeer move around us. Easy to stand with eyes closed and hear how they move, where they are, feeling a timeless sense of ‘reindeer-ness’ that stretches way over the northern lands. Imagining the clicking in a white-out in the winter, wind howling but always hearing where each other are. It’s a reassuring herd message, effortless on the reindeer’s part and made by their hooves.

One of the herd here is leucistic – a white coloured reindeer named Blue (born in a cheese-themed naming year). Blue is also deaf, so doesn’t hear the clicking. One day I saw Blue wandering off alone, and wondered how the herd relates to him, a herd member who doesn’t respond to the kind of reindeer body language and communication that is shared by the clicking. Like, if there’s the need to run, Blue may not hear how the clicking speeds up around him. It’s not a problem here – there’s no danger to run from, and the herd live out their lives to the full and any unusual behaviour is noticed straight away.

The path up to the herd goes over the Utsi bridge – named after Mikel Utsi, the Sami reindeer herder who introduced and established the first herd here back in the 1950s. Before then, the Cairngorms hadn’t seen reindeer for perhaps 1000 years, and way before then, it would have been in the Ice Age climates that the reindeer really thrived across the land. Mikel Utsi died in 1979 and the bridge was rebuilt at that time and named after him. His name is carved into a large granite boulder by the bridge and we pass this boulder many times each day. For me it’s a very special thing – this boulder probably came here with the glaciers as the landscape was formed, and there’s an odd sense of completeness with the Ice Age, the boulder, Mikel Utsi and the reindeer.

Why did I come here? – well, I wanted to understand reindeer better by being around them and amongst them. I’ve had a long term passion with Ice Age cave paintings and carvings, and have dealt with antler (mainly from Scottish red deer) as part of what I do. I work as Leaf Trading Post, supplying antler and prehistoric materials to flint knappers, museums and the like. I also work as Helen Leaf Designs, which is where I create beautiful things inspired by nature and prehistory. I work with antler, wood, silver and bronze. I’m interested in the traditional carving of Inuit and Maori peoples, but I try to work in a way that’s true to myself rather than just copy another culture.

I love working with antler of all kinds, but reindeer antler is special as it ties me in to the prehistoric images that inspire me so much. I’ve learnt so much about reindeer in my week here – kind of like reconnecting with my own Ice Age self. So now, when I carve a reindeer into antler, I understand more of the face, the antlers, the muzzle, and the lines of colour and shape. I can also recall the feel of their fur, the soft calling between mother and calf, and yes, the clicking of the hooves as the herd passes.