Every year we try and post a blog in May with lots of calf photos – because let’s be honest, it’s all any of you really want to see at this time of year!

We don’t, however, reveal which reindeer have calved at the moment, as we like to wait until after the June newsletter is sent out to our reindeer adopters before revealing who has become a mum. The reason for this is two-fold – the main one being so as not to spoil the surprise element for adopters of opening that envelope in June, and scanning down the calving list to find our whether ‘their’ reindeer has calved.

The second reason is that sadly not every calf born will survive, and reindeer are at their most vulnerable in their first few weeks of life. While we don’t shy away from the fact that reindeer don’t last for ever and do die, sometimes at a very young age, we also don’t want to upset anyone unnecessarily by allowing them to see photos of their adopted reindeer’s super-cute newborn online – only to find them suspiciously missing from the calving list in the newsletter a couple of weeks later.  It would be unfair of us to upset those of a perhaps more delicate disposition with the realities of life if it can be easily avoided by not naming who is who, at least until the calves are past the most vulnerable month of their lives.

So, moving on, please enjoy the photos below! 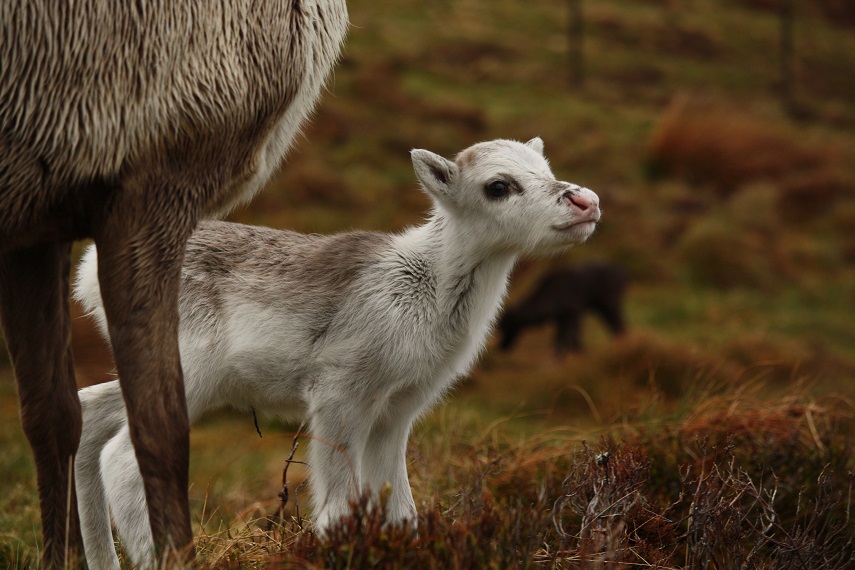 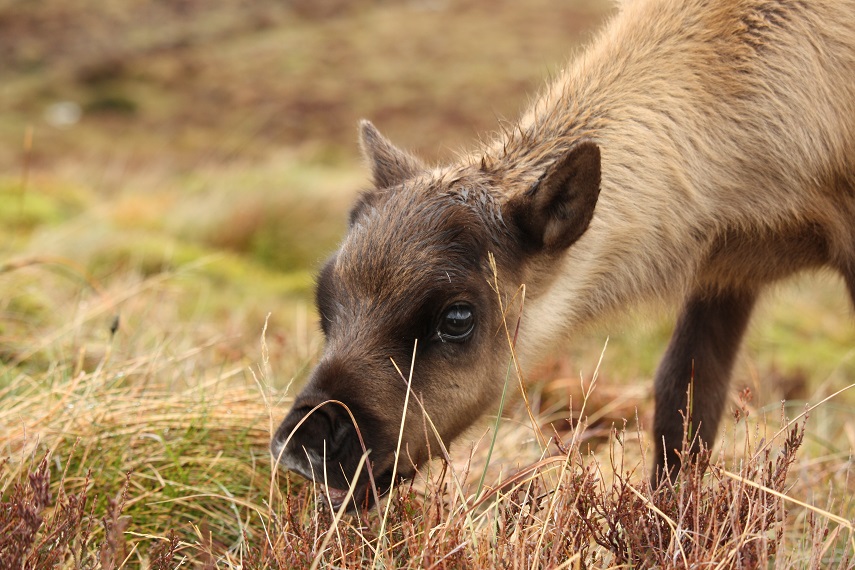 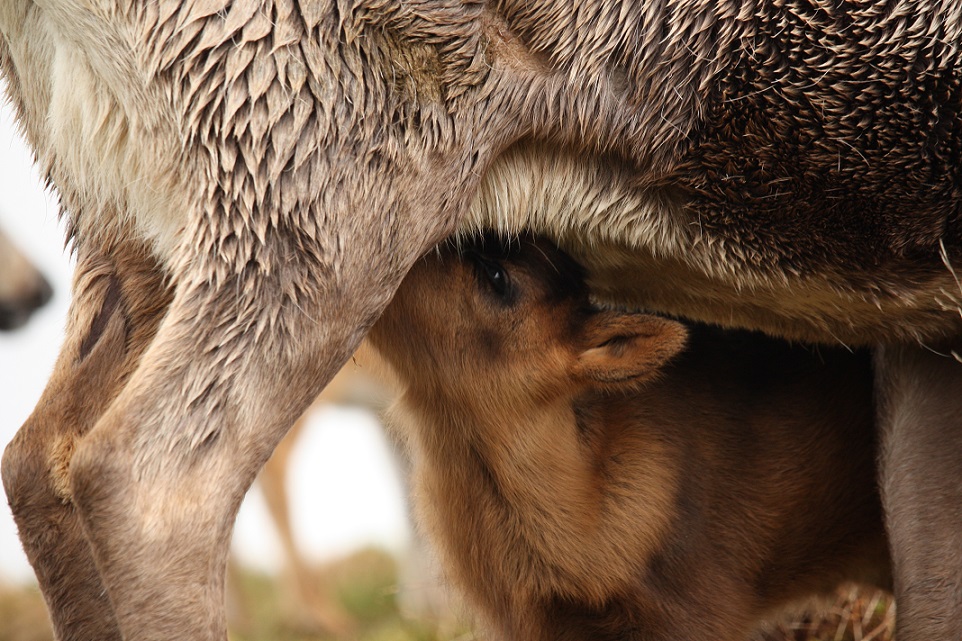 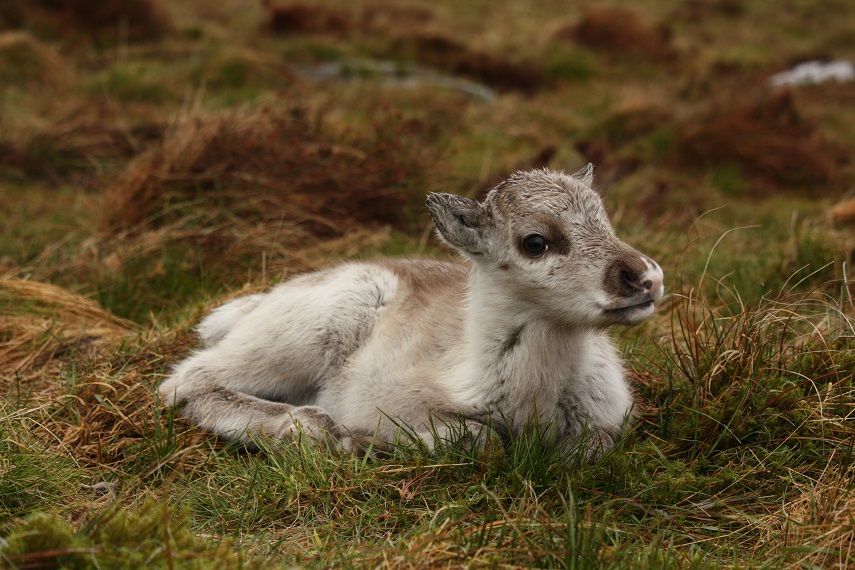 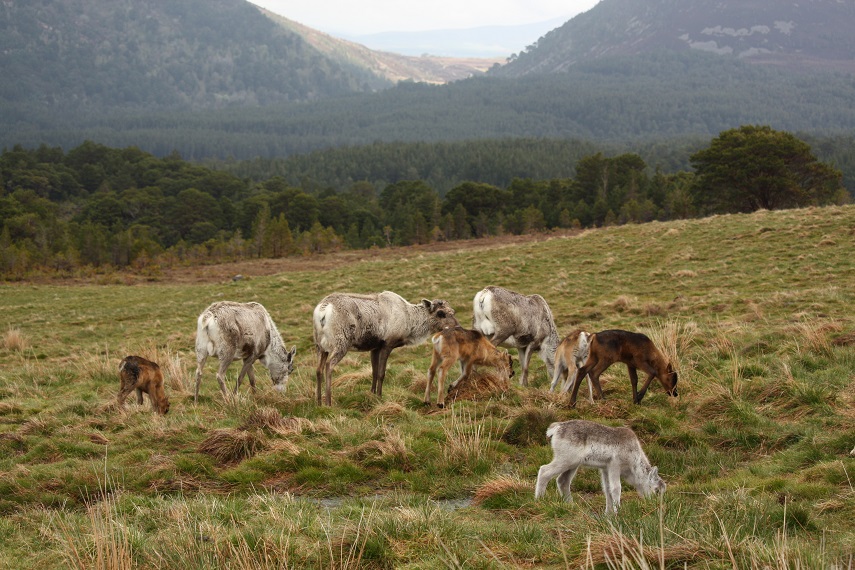 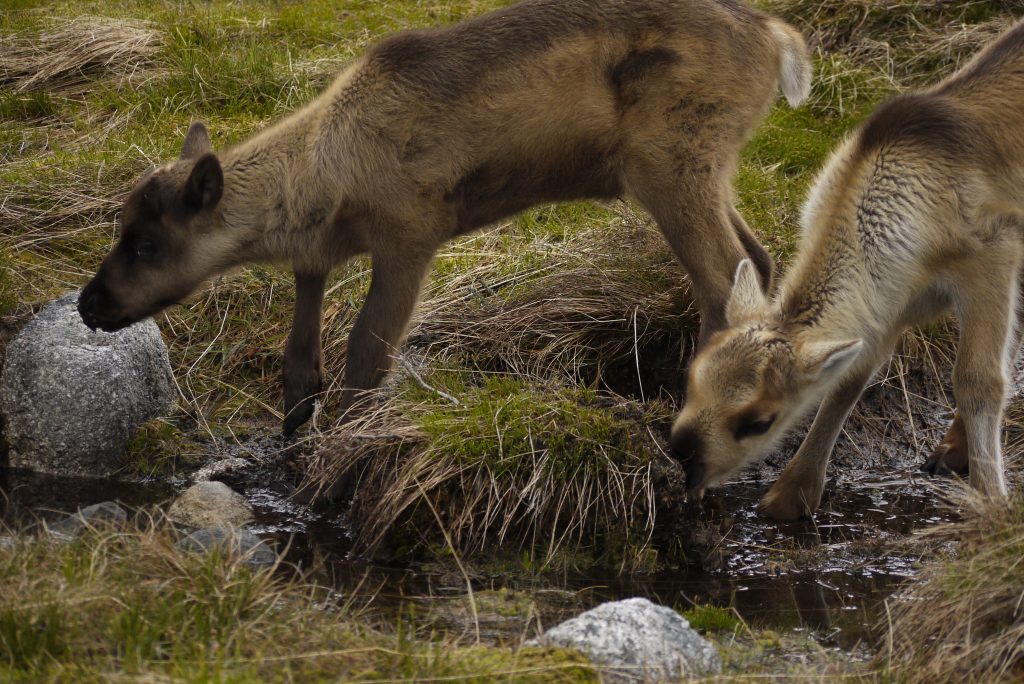 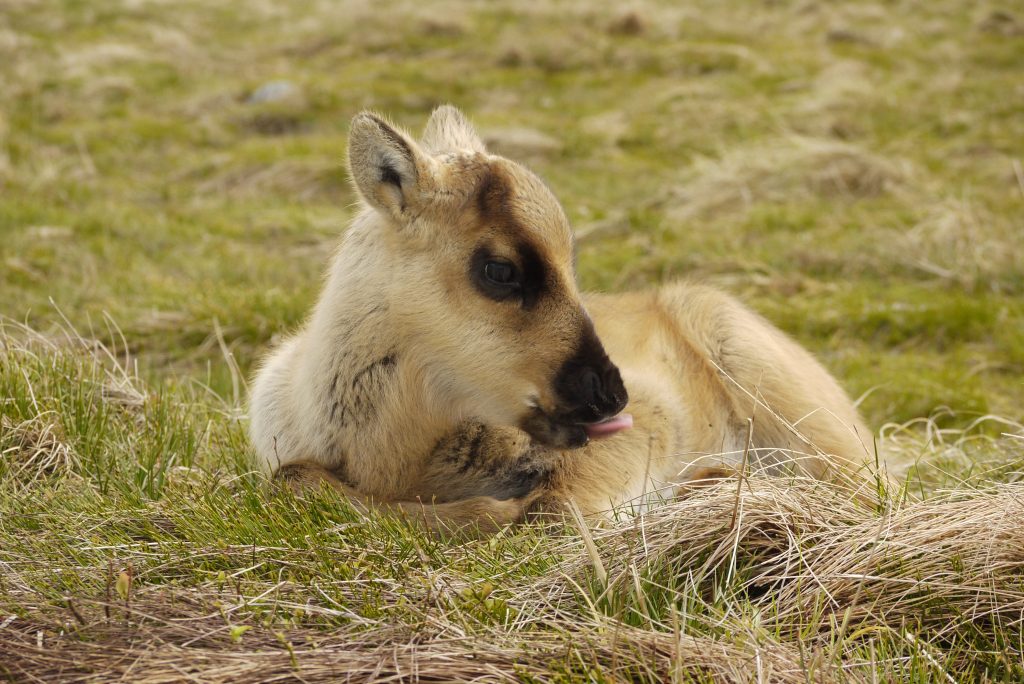 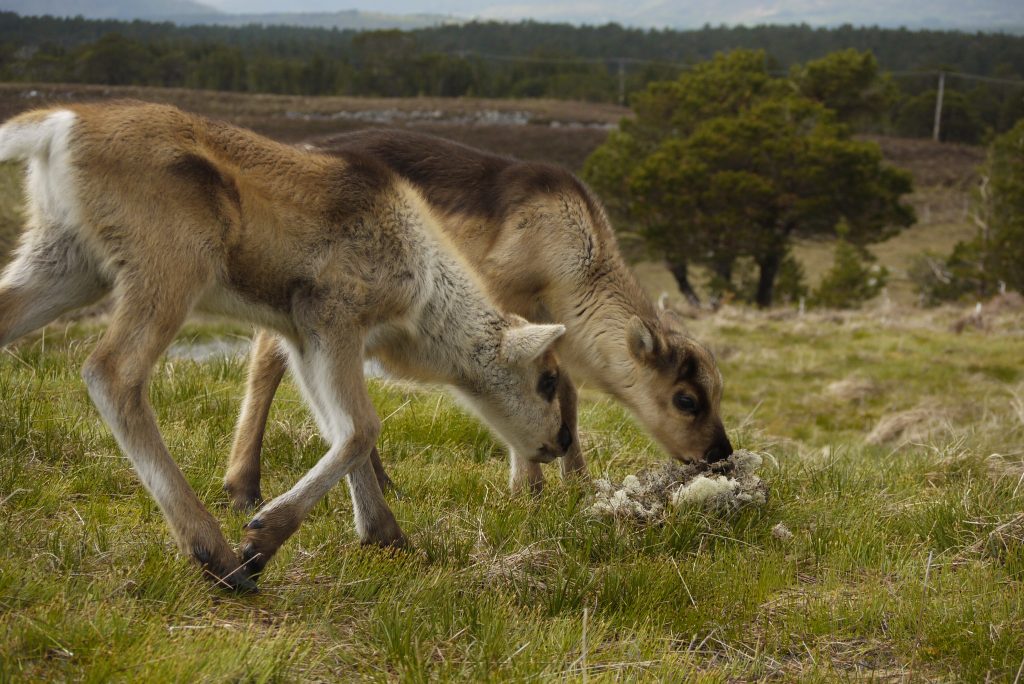 The reindeer I’ve chosen to talk about in this week’s blog is a reindeer who I like a lot. I met him when he was just hours old and he has now become one of the breeding bulls for the herd. His name is Spartan. He was born in 2016 and was named after that year’s naming theme of ‘lost civilizations’. This means he’s about 5 years old and is coming in to his prime. In this blog I’d like to talk a bit about Spartan’s journey from unassuming calf to sweet-natured breeding bull as well as his heritage and his offspring.

During Spartan’s first year of life he was always an unassuming calf. He wasn’t exactly oozing in character and was a relatively quiet calf. He was always polite and never pushy, and he grew very simple antlers. However, as you can see from the photo below, his antlers are far from simple nowadays. They are one of the largest and most beautiful in the herd.

From a personality point of view, Spartan really grew into himself over the years. He has a sweet, lovely nature, even during the rut. For those who don’t know, the rut is a period in autumn – about a month in duration – where reindeer come into season and the breeding occurs. Breeding bulls are known to alter their nature and become more territorial which can lead to these bulls being more scary and aggressive (hence why we don’t visit the breeding bulls on hill trips in October/November). However, Spartan remained well-behaved despite being swarmed by hormones. Compared to our other breeding bulls he is definitely on the well-behaved end of the spectrum. Perhaps this was due to his much-loved mother, Bumble, being incredibly sweet-natured and passing on those genes to her son. If you wanted to read more about Bumble, you can read a blog on her by clicking here.

Spartan had his first experience of being a breeding bull in 2019 and is believed to be the father of 10 calves that were conceived that year and later born in 2020. However, the selection of Spartan as a breeding bull wasn’t an obvious selection. Each year we have to make the decision of which young adult male reindeer we want to pass on their genetics for the future of the herd, and which reindeer we want to castrate. This decision is made when the male reindeer is at least 3 years old and is integral in keeping the number of reindeer in our herd to a sustainable amount. Moreover, by controlling the breeding it means that we never have to cull any reindeer. When it came time to select which reindeer were to be castrated from the 2016 year we decided that we would keep 2 reindeer as breeding bulls that year. Roman was the first choice and after lengthy discussions, Spartan’s genes seemed to win out over other contenders such as Aztec and Celt. He kind of snuck through the castration net, so to speak.

Spartan comes from a blood line that had almost become lost within our herd. And now that he is one of our few breeding bulls, it means that the blood line has a new lease of life. Spartan’s father was the popular breeding bull Nutti who was imported as a calf from Sweden in December 2011. We imported a large amount of young male reindeer from Sweden around that time as we wanted to diversify the genetics in our herd and introduce more blood lines. Nutti unfortunately died in April 2018 whilst free-roaming in the Cromdale hills but as you can see from the photo below, his genetics live on in Spartan whose looks, and indeed nature resemble that of Nutti.

In 2019, almost immediately after the decision that he would become a breeding bull, Spartan was put into the rut and introduced to his own group of females that were coming into season. It turned out that the other breeding bull contenders were related to more of the eligible cows than Spartan. Therefore, we believe he is father to a group of 10 lovely calves (now yearlings) all of whom were named after ‘peas, seeds and beans’. The calves that we think are probably Spartan’s all appear to be very sweet natured and endearing. They are Cannellini, Lupin, Hemp, Chickpea, Mushy, Pinto, Edamame, Adzuki, Borlotti and Haricot. And with only a few exceptions, many of the calves have distinctive white face markings, just like Spartan. These are most notable on Pinto, Edamame, Hemp, Borlotti and Adzuki, the offspring of Morven,  Emmental, Addax, Clootie and Gazelle respectively.

Although we didn’t use Spartan in autumn’s rut of 2020 he retains his ‘equipment’ and his name is being discussed as a potential breeding bull for this year’s rut. He is currently in great condition and is having a very peaceful year! In the early months of 2021 Spartan has been free-roaming on the Cromdale hills.

So there you have it! The story of Spartan – one of our friendliest breeding bulls.

This is the third (but maybe not last!) book I have written about reindeer.  Published by The History Press, I was approached by them in the latter months of 2015 to ask if I would write another book about reindeer. 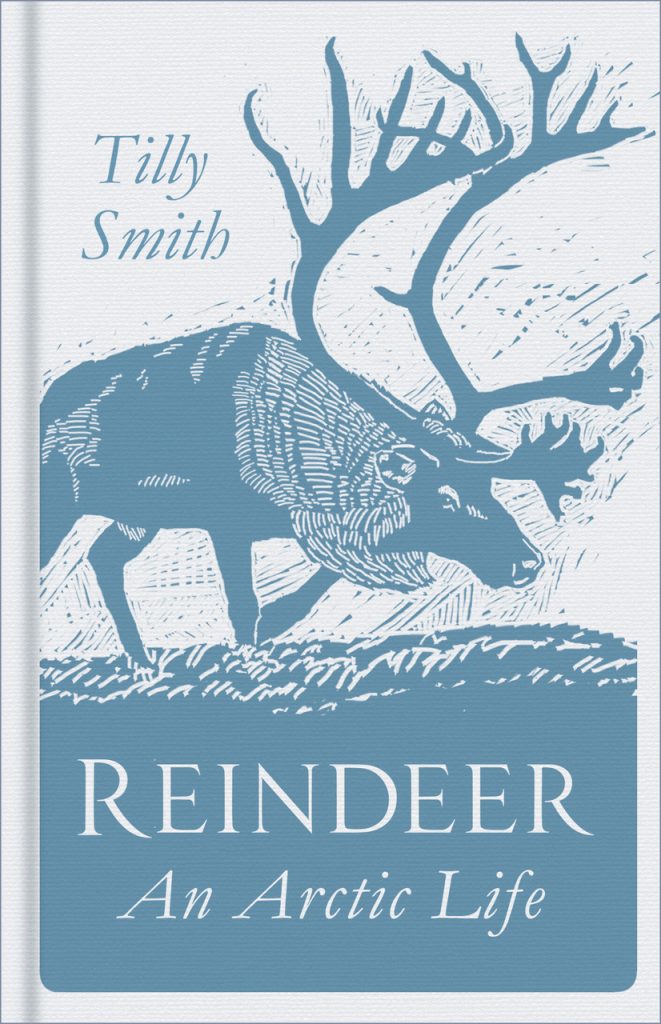 My immediate reaction was, “I’m not sure, there is only so much that can be written about reindeer!”, but after I had given it some thought I decided to agree.  I don’t dispute I enjoy writing, I am passionate about reindeer and I have had many ‘busman’s holidays’ to reindeer places in the world. It would also be another way of promoting our unique herd of reindeer. So by the end of the year I was already putting pen to paper.

The History Press was looking to have the book on the shelves by Christmas 2016 and so I had to get my skates on. In fact as a person who likes a deadline I said I would have the draft ready by the end of March. And much to their surprise I did!

When we talked about the layout of the book the editor was keen to have the book illustrated, rather then include photographs. At first I was not so sure this was a good idea, reindeer are incredibly photogenic and of course live in some of the most iconic places in the world. However now in hindsight I am really pleased that it is illustrated with line-cut drawings and actually I think it may have made me more descriptive in my writing. 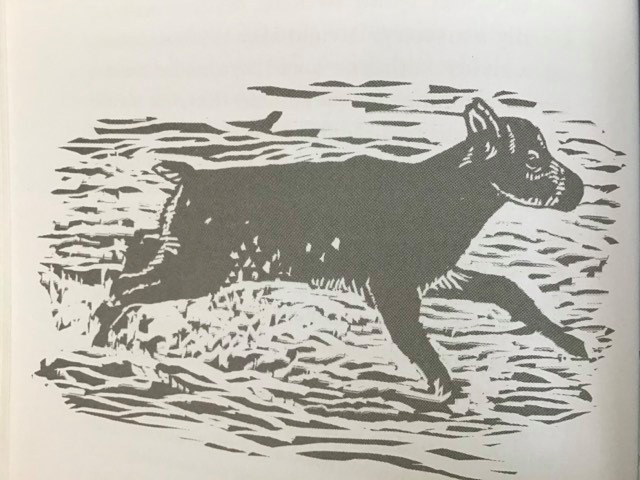 I start and finish the book in winter, the time of year that reindeer are without a doubt, in their element.  It is the sort of book you can dip into for fun facts or entertaining stories, and a must for any reindeer enthusiasts, groupie or geek like myself!

Reindeer: An Arctic Life is still in print and if you fancy a copy then buying a signed copy (with personal dedication if you so wish) from us here at the Cairngorm Reindeer Centre will help to support the herd far more than going to Amazon! You can buy it from our online shop ( along with lots of other reindeer related gifts ) or just ring the Reindeer Centre and speak to a friendly reindeer herder to you prefer to order things the old-fashioned way, or want a personalised dedication.

We lost one of our old girls a few weeks back, Fonn. She was a really sweet character in the herd and got to the grand age of 17, only one month off her 18th birthday. Considering anything over 10 years old is doing well this meant she did really well! Although the last few years she was starting to look her age she continued to stay in good condition, giving us no cause for concern. This was helped by us letting her get her head in the bag of feed of course!

As a youngster she had her fair share of calves of which her son Rubiks and daughter Merida are still going strong. Her oldest daughter Joni we lost in 2020 to old age, however Joni also had a few calves over the years so it’s a good sized family. She has 5 grandchildren currently in the herd – Bourbon, Jenga, Jute, Dr Seuss and Ärta. She also has one great grandson, Jelly. I wont get into cousins and second cousins cos I’ll be here all day.

In the past 7 years Fonn hasn’t had a calf and as a result lived to a grand age. She was always super reliable when bringing the herd in for feeding time and if we ever needed to catch a reindeer out to walk on a halter as a lure for the others to follow then Fonn was a good one to do this. Last year she re-formed a very sweet bond with her 9 year old son, Rubiks. The two of them remained side by side for 7 months through winter, spring and summer 2020 which considering they’d spent no time together in the years previous to that was quite amazing they remembered each other. Dr Seuss, her 4 year old grandson has turned into one of the most recognisable characters in the herd not only through looks with his big antlers, white face and dark body but he also featured as one of the main reindeer in last year’s TV show ‘A Baby Reindeer’s First Christmas’.

Many reindeer come and go throughout the years and although they are all great characters some leave a slightly bigger hole in your heart than others and Fonn was certainly one of them. Of course it is sad, however the sadness is outweighed by knowing she had such a fantastic life up here in the Cairngorm Mountains. She has succession through her wonderful family which is a mix of Christmas reindeer, females and young bulls so the line will go on and she can be proud of what’s to come.