It’s just a couple of weeks after the shortest day of the year as I write this (6hrs and 35 minutes of daylight up here) and the weather has certainly been wild and wintry, with deep snow and thick ice across the lochs. With short days and extreme weather come additional seasonal immigrants, such as snow bunting from Scandinavia, and some of the animals in new disguises, with ptarmigan and mountain hares changing their colours to suit the elements. The wind turns harshly abrasive, carrying tiny pieces of ice, freezing rain, or thick blizzards, and the nights open up to all the phases of the moon or the open milky way. It’s like the mountains find themselves in a whole new dimension.

Recently I’ve discovered that poetry can be a great way of condensing a particular feeling, season, or place, and it’s truly delightful when a poem seems so relevant to a Hill Trip, day out with the free-range reindeer, or view of the Cairngorms and the Strathnethy from up on the hill.  Here I have gathered some of my favourites which I hope can bring those of our supporters who haven’t been able to visit (I’ve said it a lot, but what a strange year…) back into the feeling of a day on the hill with the reindeer. Some of my photos from this winter are included too!

The first poem which comes to mind is the Ryvoan Bothy poem, one which anyone who has visited Ryvoan Bothy, a couple of miles away from us, has probably seen pinned inside the door. Many of our visitors in the summer also take the gorgeous walk up to the “Green Lochan” or An Lochan Uaine so I imagine a lot of the places mentioned in this will be familiar to many.

Ryvoan Bothy Poem:
I shall leave tonight from Euston by the seven-thirty train,
And from Perth in the early morning I shall see the hills again.
From the top of Ben Macdhui I shall watch the gathering storm,
And see the crisp snow lying at the back of Cairngorm.
I shall feel the mist from Bhrotain and the pass by Lairig Ghru
To look on dark Loch Einich from the heights of Sgoran Dubh.
From the broken Barns of Bynack I shall see the sunrise gleam
On the forehead of Ben Rinnes and Strathspey awake from dream.
And again in the dusk of evening I shall find once more alone
The dark water of the Green Loch, and the pass beyond Ryvoan.
For tonight I leave from Euston and leave the world behind;
Who has the hills as a lover, will find them wondrous kind.

The poet and writer whose work is most famously connected to the Cairngorms is Nan Shepherd (1893- 1981). The first woman to feature on a Scottish banknote, she was a student and then lecturer at Aberdeen University in English Literature, the part of her life which she enjoyed alongside hill walking, through which she extensively explored the Cairngorms. The Living Mountain, her last published book is an awesome and personal, although at no point self-absorbed, memoir to her days on the Cairngorm plateau. Although a lot of her work is in plain English, I think her work is pretty unique for preserving Doric (the strong dialect in the North East of Scotland) so well, and so beautifully.

Writing with equal admiration about their homeland are the Eveny, the reindeer herders of Siberia. Considering reindeer are so intrinsic to their culture that they both feature in their creation story and provide a livelihood, it’s not surprising that many of their songs and poems mention reindeer. Very little of this has been recorded though, however, in Reindeer People; Living With Animals And Spirits in Siberia (Piers Vitebsky) this song is translated and shows the deep connection which the Eveny have with their animals and the land.

I have come from afar,
I have not beheld you for so long,
With all my heart I love you,
My Homeland!

The Autumn leaves fall,
My voice echoes far,
My song is about you, my homeland,
Birthplace of my ancestors

It is difficult to source the lyrics or lines of poems and songs by minority cultures and people (which are the reindeer herders of the north) such as the Eveny or Sami, due to the suppression which these groups have faced, and also the fact that many of the poems are part of an oral tradition, passed on over time but not recorded. An exploration of Sami poetry, a lot of it related to the reindeer can be found here.

Over on the North American continent, the caribou (which are genetically the same species as reindeer: Rangifer tarandus) have a different relationship with people because they’re not herded or domestic, instead living wildly and sometimes being hunted. Richard Kelly Kemick captures the full seasonality of their lives in his book, Caribou Run which follows the year as the animal. I find this one intriguing:

The Love Poem as Caribou – Richard Kelly Kemick
It’s hard to imagine. As doves, yes,
or even vultures. But there’s nothing of a ballad
in the hard weight of antlers. You can’t cut
into an ode, stripping its skin to bones cabled
with muscle, or search its creased face for something
you can almost explain. And a sonnet has never
made me see myself inadequate beneath
the bright light of evolution’s long apprenticeship,
acutely aware of the many failings of my own form.
But maybe it’s in how a love poem will cross
a body of water without being about to see
the other side. Or maybe it’s in the deep prints
left in the drifts, that speak of how hard
it must have been to move on from here.

His poem “Antlers” can also be found here.

On the same continent, Mary Oliver is a poet who has spent a lot of time observing nature, and in her writing brings the reader on a quiet walk with her.

The Poet Dreams of the Mountain – Mary Oliver
Sometimes I grow weary of the days, with all their fits and starts.
I want to climb some old gray mountain, slowly, taking
the rest of my lifetime to do it, resting often, sleeping
under the pines or, above them, on the unclothed rocks.
I want to see how many stars are still in the sky
that we have smothered for years now, a century at least.
I want to look back at everything, forgiving it all,
and peaceful, knowing the last thing there is to know.
All that urgency! Not what the earth is about!
How silent the trees, their poetry being of themselves only.
I want to take slow steps, and think appropriate thoughts.
In ten thousand years, maybe, a piece of the mountain will fall.

And lastly, heading back home to Scotland and the Scots words and phrases, our rewilding landscapes, and great, airy glens we will finish with a poem which couldn’t possibly be more relevant. This one is in the first few pages of the book Hoofprints, a book which celebrates the 60th anniversary of Reindeer in the Cairngorms. It proclaims the “Reindeer Council of the United kingdom is proceeding with the experiment of importing reindeer to Scotland” – Punch magazine, August 1951. Look out for the hints of hunting, these refer to the plan that once the reindeer would be established in Scotland, they would contribute meat to the post-war rationing. Thankfully, after giving the animals names and getting to know them, our herd has always been kept for it’s own environmental and educational value to the Cairngorms.

Stag party
O Lords of misty moor and ben!
O monarchs of the mountain glen!
Crowned with your proudly branching span
Surveys your kingdom while you can.

Where Affrie’s corried glen divides,
In Atholl’s furthest forest rides,
Amid the firs that fringe Loch Shin
Will feed the herds that fed the Finn.

Their splayed and hairy hooves will pound,
Your ancient Highland stamping ground
And Stalkers (snug in hats with flaps)
WIll hunt the quarry of the Lapps.

Will other antlers grace the walls
As hatstands in suburban halls-
Sad pointers to the fact that you
Have yielded to the Caribou?

Shall reindeer, blue of flesh and blood,
Reign where the ruling red deer stood,
Or will one more invasion fail
And wiser councils yet prevail? 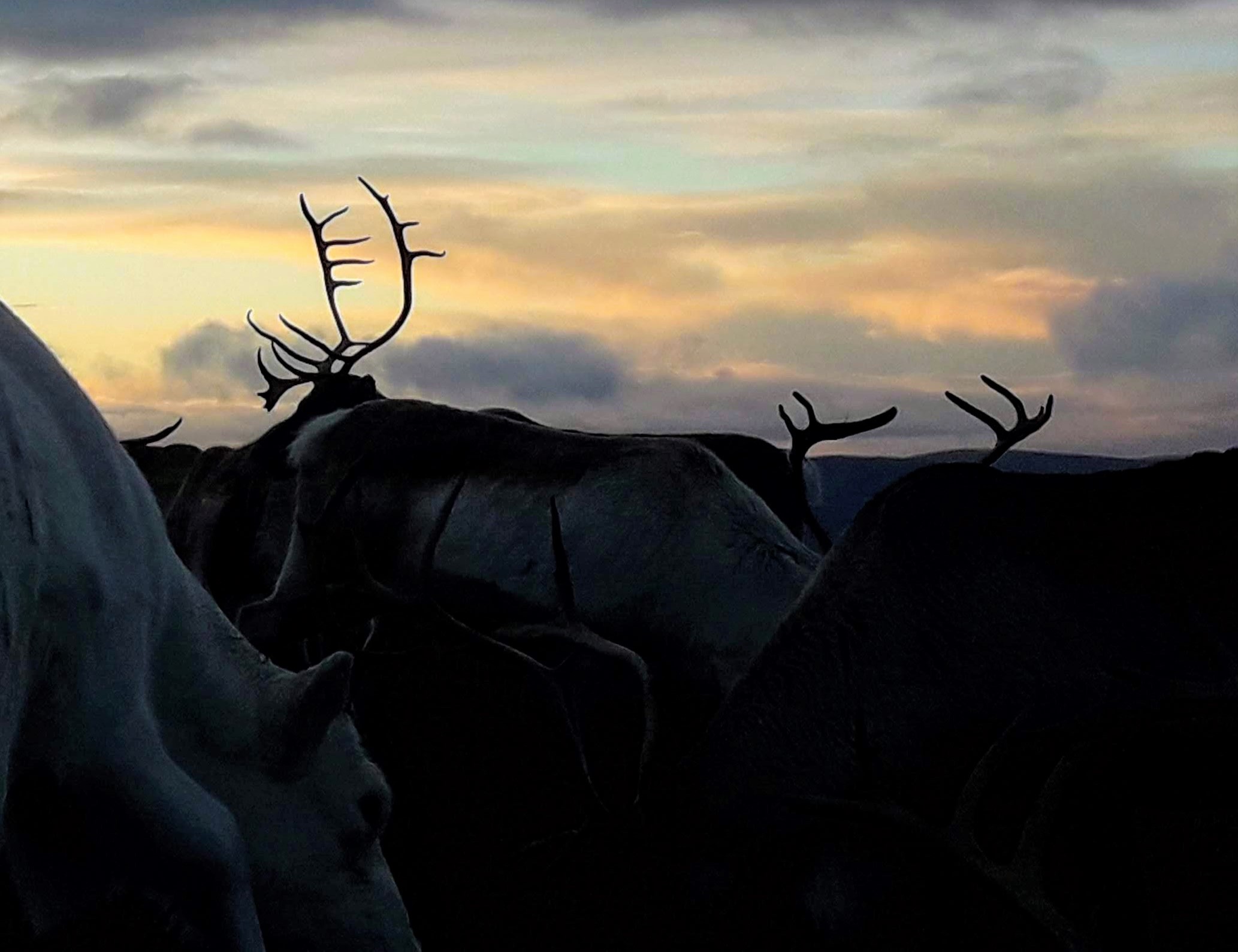