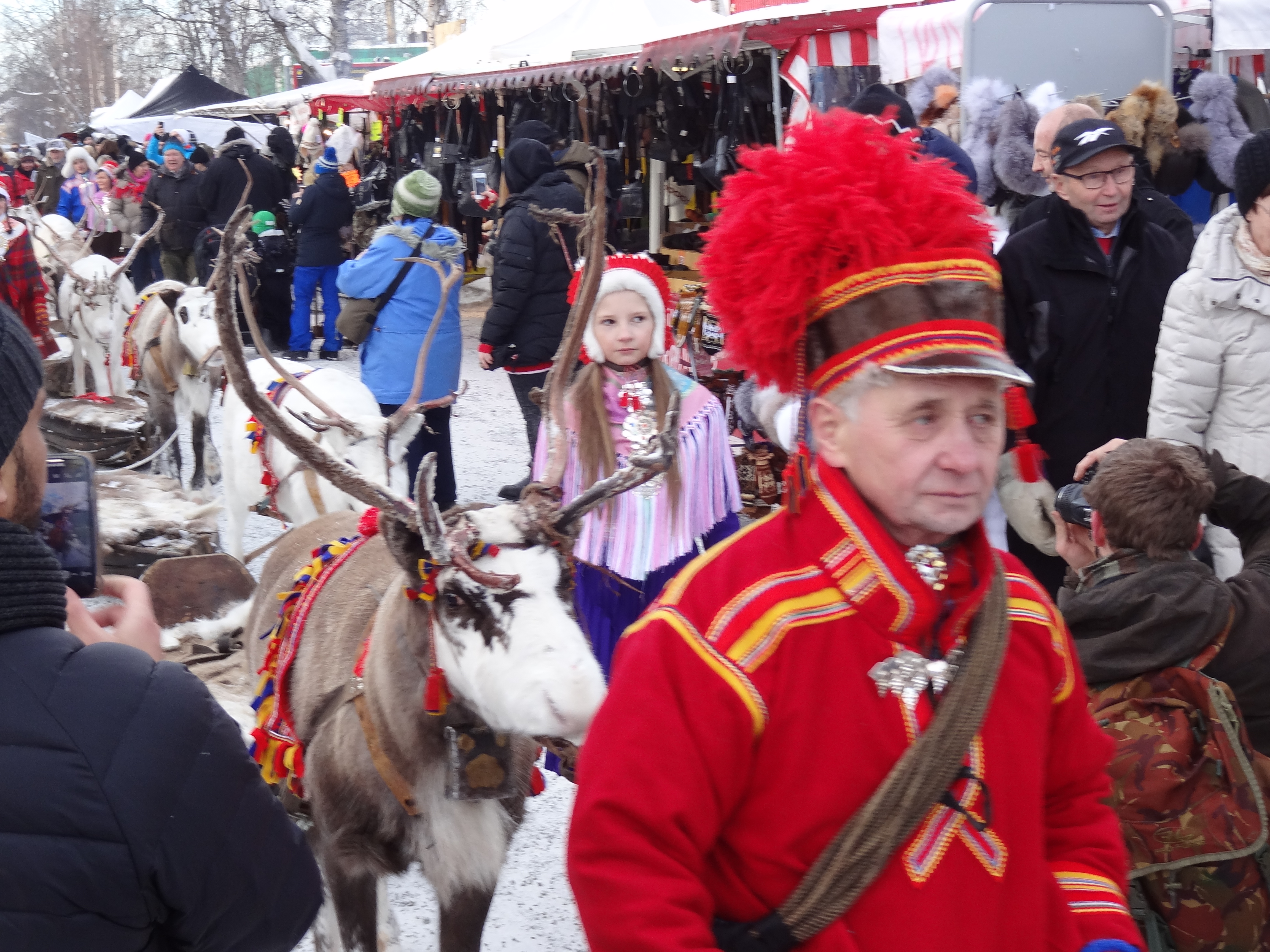 Back when everything felt much more ‘normal’ in February 2020 four of us from the Reindeer Centre went to the celebration of all things Sámi , the ‘Jokkmokk Winter Market’ in Arctic Sweden. It is held in the first weekend of February every year, and apart from world-class Sámi art, culture and handicraft, visitors are usually greeted by proper, cold winter weather.

Jokkmokk’s Market begins on the first Thursday of February every year. Situated just north of the Polar Circle and with a population a little over 2,000, the small town of Jokkmokk is a tranquil gem on the border of Laponia, the only combined nature and cultural heritage site in Scandinavia. Jokkmokk’s Market was first held in 1605, some 400 years ago, originally purely as a place to trade and meet. The Sámi people met to trade goods, to socialise, and possibly to get a bit tipsy too. At least they’d arrive in their party clothes! The market was created following a request from King Karl XI, who sought to exert control over trading in Lappmarken in order to collect taxes for the Kingdom. To make everything easier to control and run smoother, they organised the market during the coldest time of the year. People had to stay near the houses to keep warm. You might think this sounds like pure fiction, but the fact is that the Swedish state wanted to create a market for economic reasons – money was needed for all the wars the king was involved in down in Europe. And in that way, Jokkmokk got a market in the middle of the freezing cold. 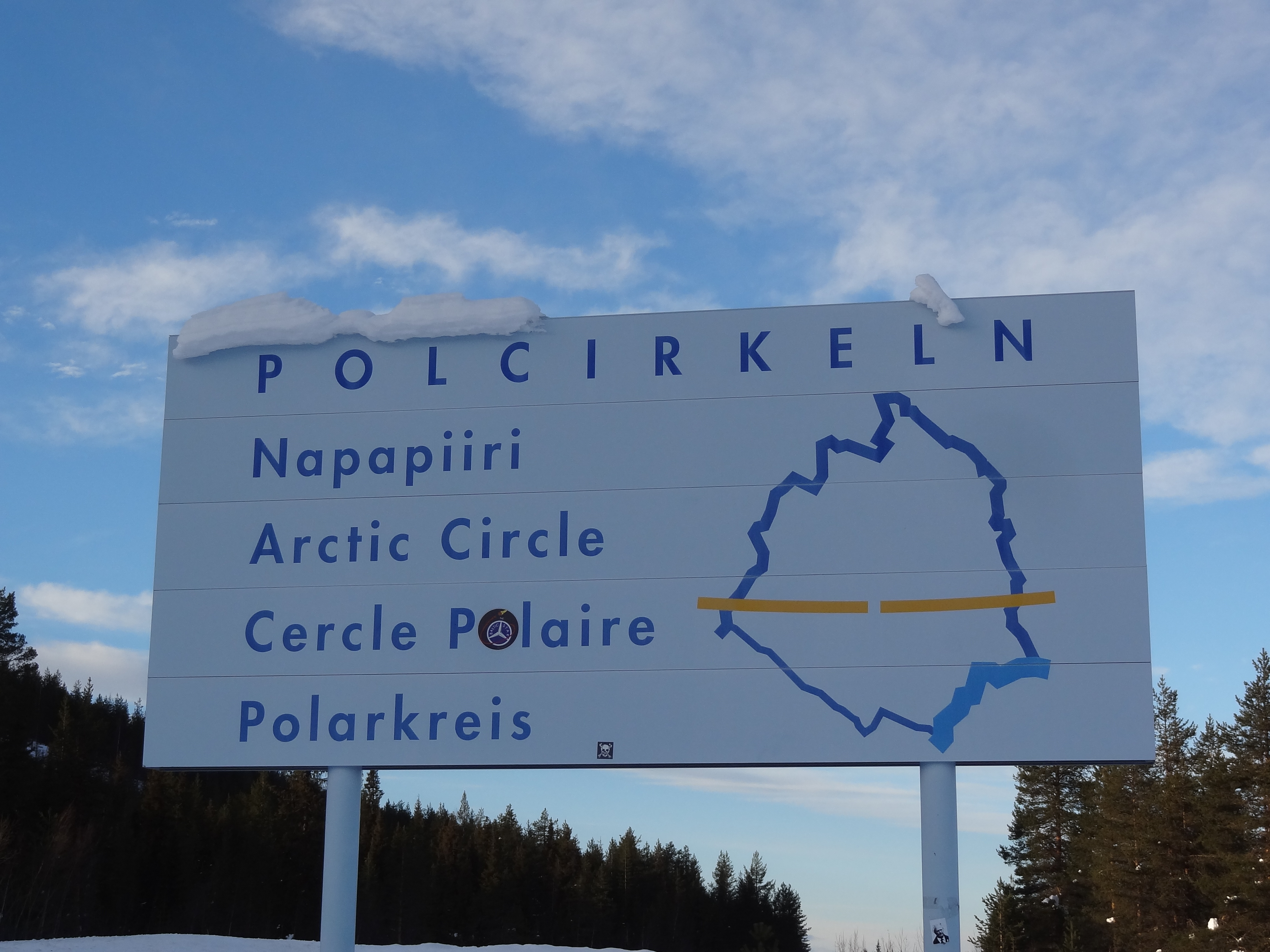 At a quick glance, as you zigzag between stands selling sweets, t-shirts, knitted socks, doughnuts, there is little to differentiate the market here in Jokkmokk from just about any other market in Sweden. But if you look further than the muddle of seemingly pointless things you will find the genuine and the real. Much of the handicraft, art and jewellery are created in materials derived from the reindeer, such as hides and antlers. It’s an intriguing fusion of traditional Sámi styles and new, modern influences.

At Jokkmokk’s Market, there’s no mistaking that reindeer are a fundamental part of Sámi culture – they have been an integral part of Sámi life for thousands of years, from winter and summer pastures, from coastal regions to mountain terrain. Throughout history, reindeer have provided humans with food, clothing and materials for functional items, while in past times they were also used to transport everything imaginable between settlements.

For over 50 years, Per Kuhmunen has been walking his reindeer as a daily feature at Jokkmokk’s Market. 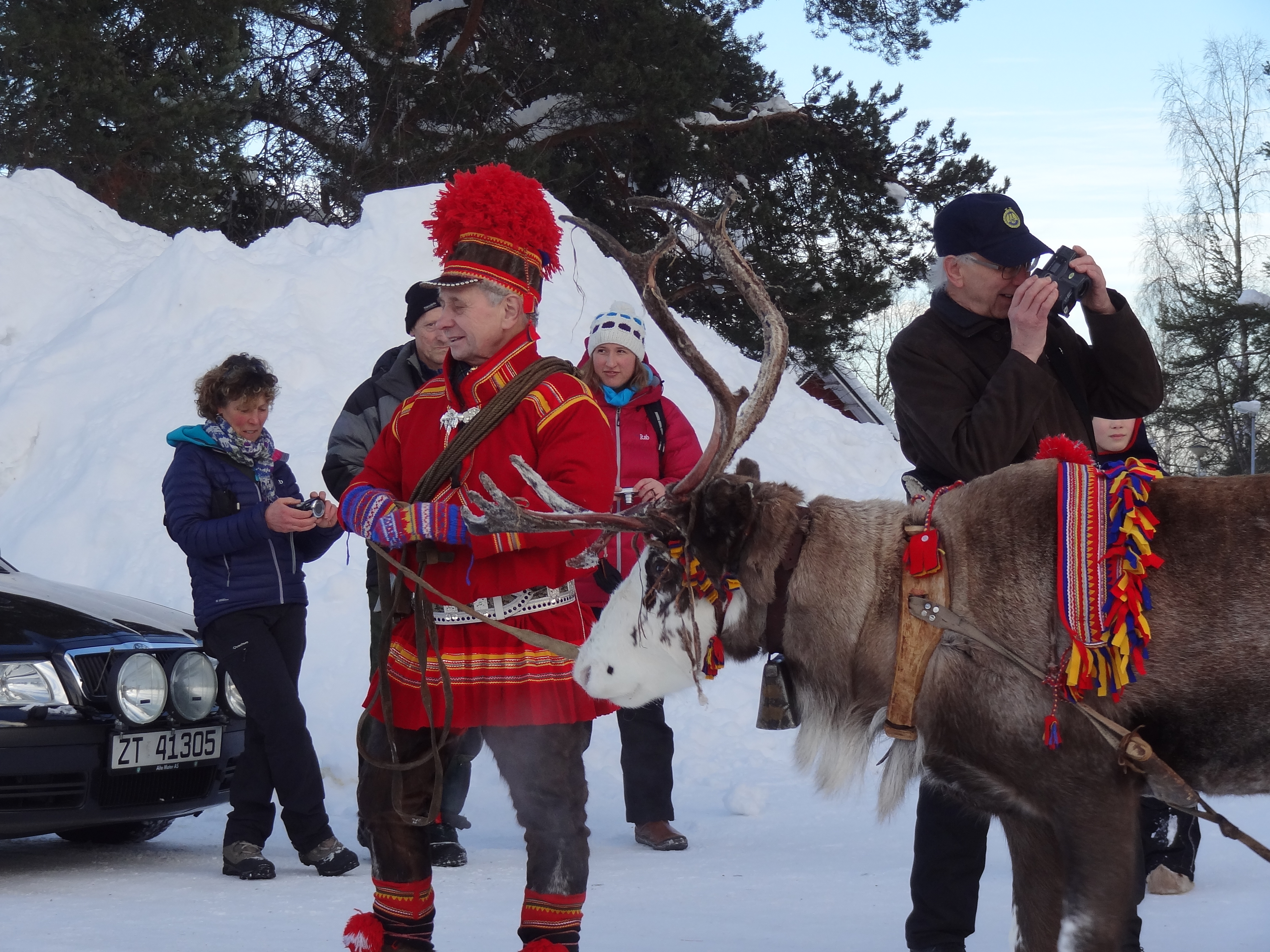 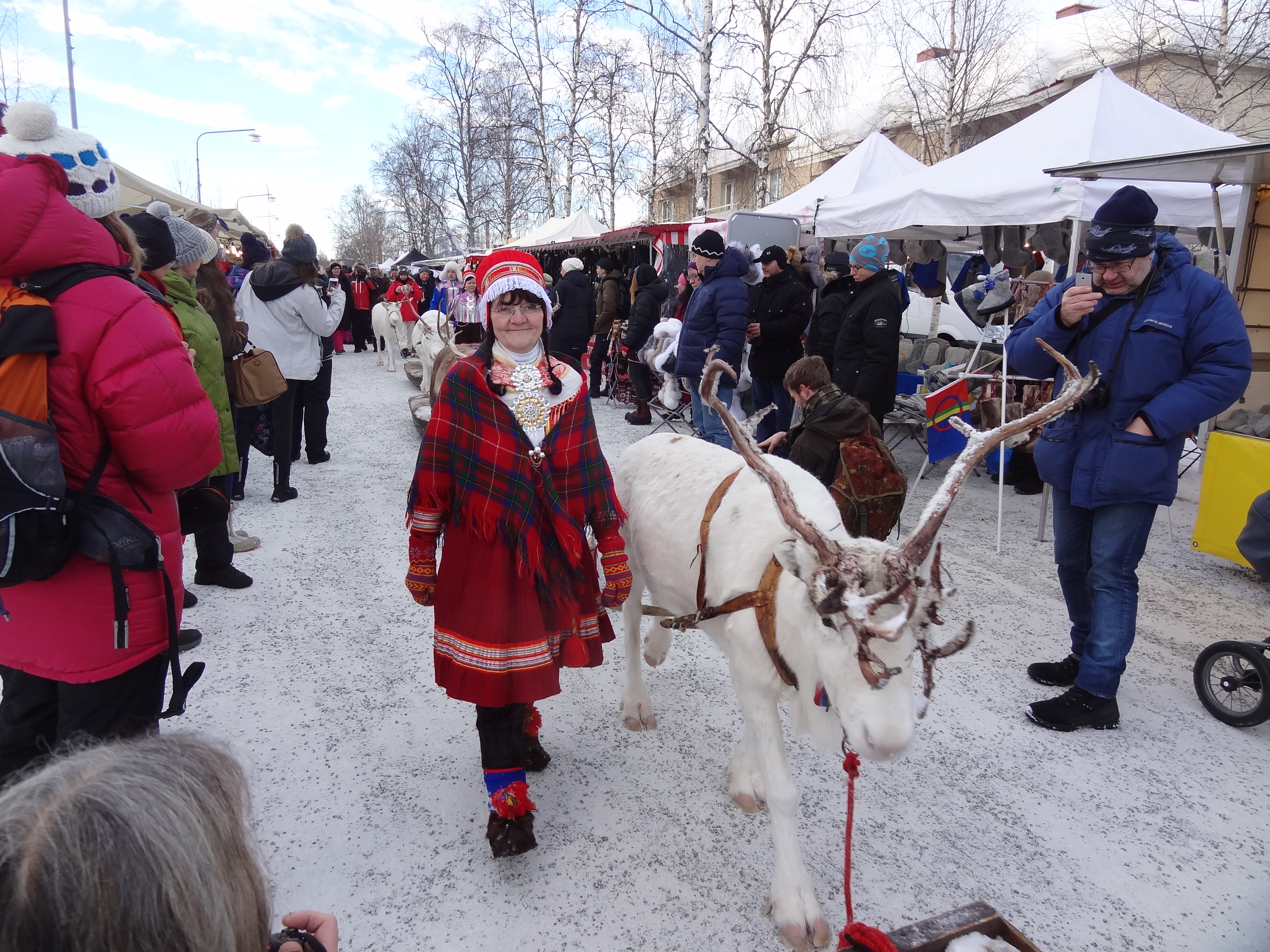 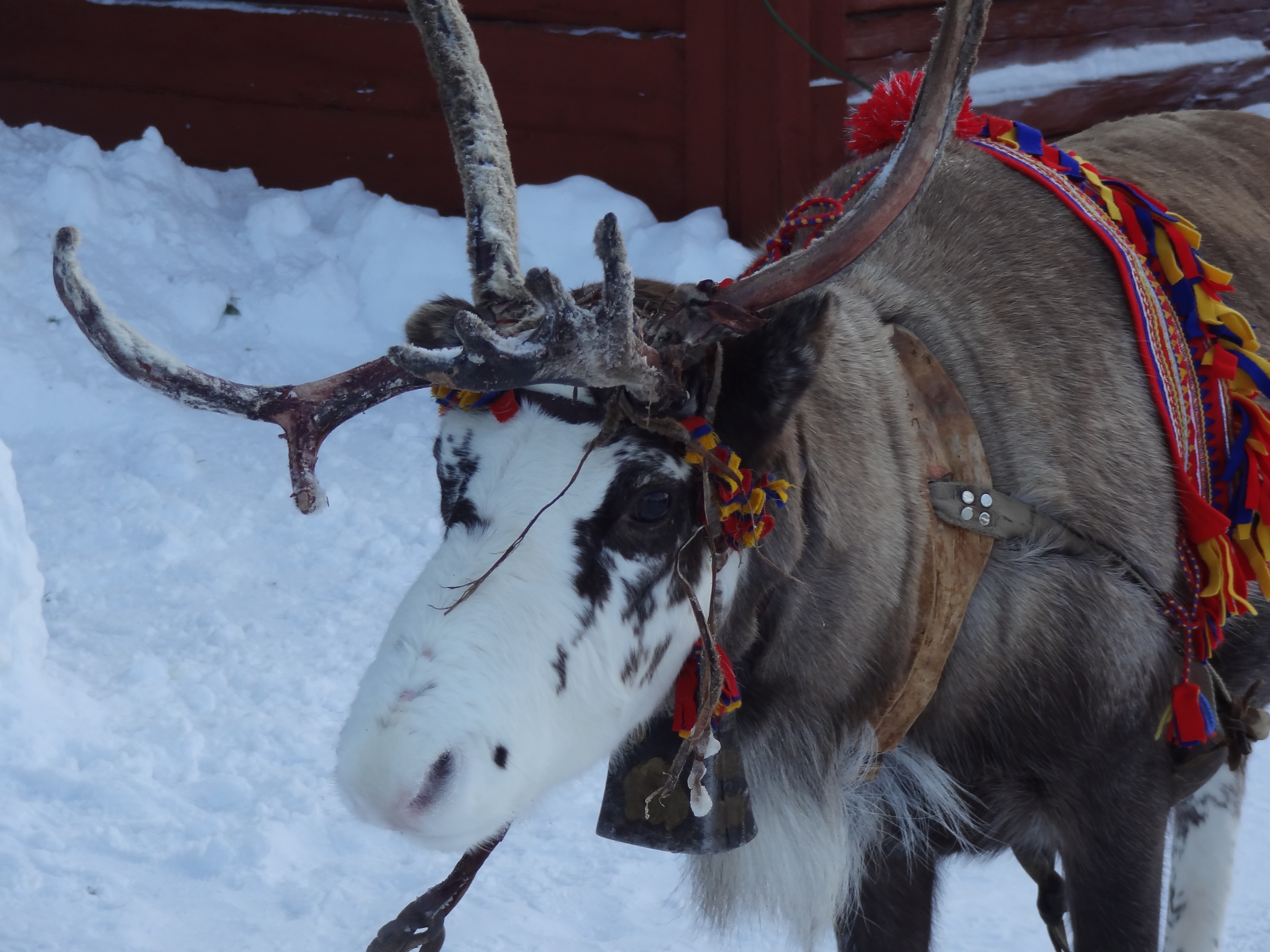 It’s not unusual for temperatures to plummet below the –30 degree mark. To get the most out of your market experience, it’s important to have the right clothing – multiple layers of warm materials such as wool, or other functional fabrics, covered by a heavy-duty down jacket, and a sturdy pair of winter boots. Add a fur cap and the warmest gloves you can find, and you’re all set!

Jokkmokk’s Market is an annual highlight, however, this year things have to work a little different and the Jokkmokk Market has to go online… Maybe a little warmer from your kitchen table or living room than walking the streets themselves, though I know I would still prefer to be there in person having experienced the amazing atmosphere this market has to offer, even with cold hands! Learn more by visiting the market’s website and have the opportunity to purchase items from the market – the next best thing to actually being able to visit!

Mikel Utsi, who re-introduced reindeer into Scotland in the 1950s, originally came from the Jokkmokk area and still to this day when we travel to northern Sweden we stay with his family who are always very welcoming. It helps too if we bring a good bottle of Scottish Whisky! I feel extremely lucky to have visited this market a few times now and I hope this year is the only time it will have to resort to going online as nothing beats being there in person!