With all these photos of calves over the last few weeks on our social media pages, I thought I’d dig out some photos of adult reindeer in our herd when they were just a week or two old, as a way of demonstrating their colouration and it’s changes with time. Reindeer are born in an extremely warm winter coat to protect them from the elements, but this calf coat isn’t necessarily the same colour as they will end up.

There’s a very short window from when they are born in May, to when they first moult in July, when they have this lovely calf coat. By July they have a short, darker summer coat, although their legs often retain their calf coat for a few extra weeks, and then their adult winter coat grows in for the first time in early September. At this point onwards they look like mini adults, and have lost the ‘cute’ factor. 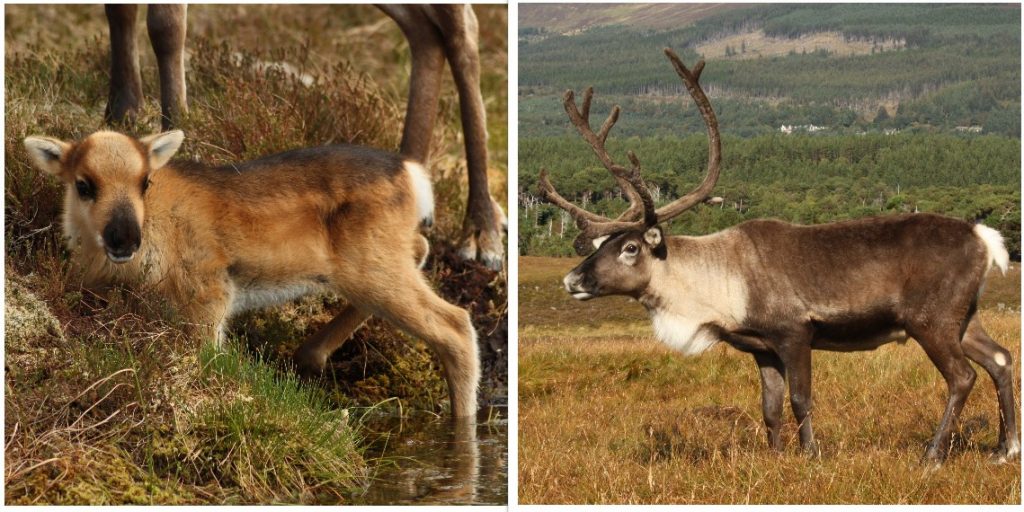 We’ll start with Aztec. He was the most common colour for a calf, a gingery brown that we just call ‘normal coloured’. As an adult he’s still ‘normal’ – as common as muck! (But only in colour, not character!). 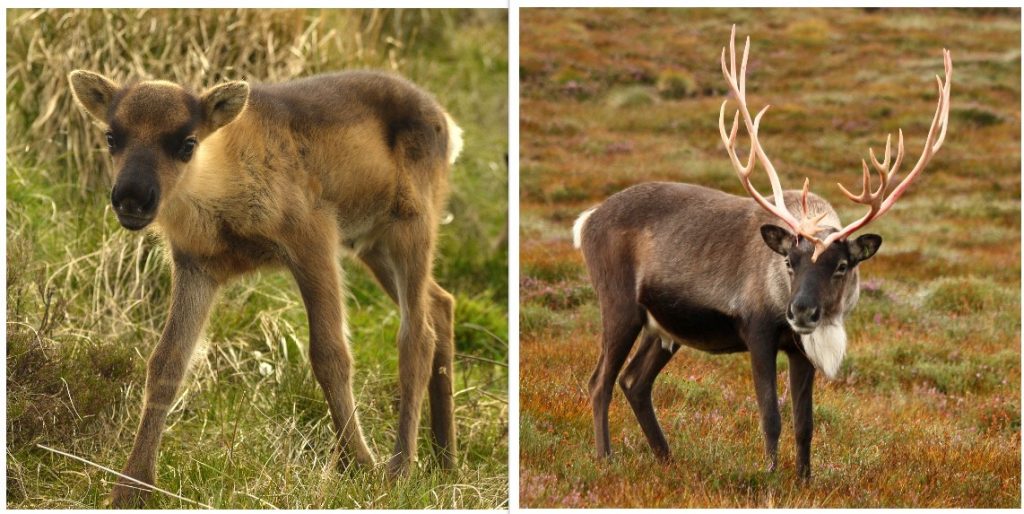 Roman was also a ‘normal coloured’ calf, although a much richer red colour (NB. it’s not so noticeable in this photo as it was taken on a different camera to the other pics) than the gingery colour of many calves. The rich red look is one of my favourites amongst the calf coats!

Still ticking the ‘normal coloured’ box is Hamish, although you’ll notice the blacker back he had. This photo popped up on my Facebook ‘memories’ for 10 years ago recently – where has the time gone?! Hamish had to be pulled out by Fiona after getting stuck being born – hence the rather weak looking little calf knuckled over and two herders in attendance (trying to assess whether there’s any milk in that udder…). 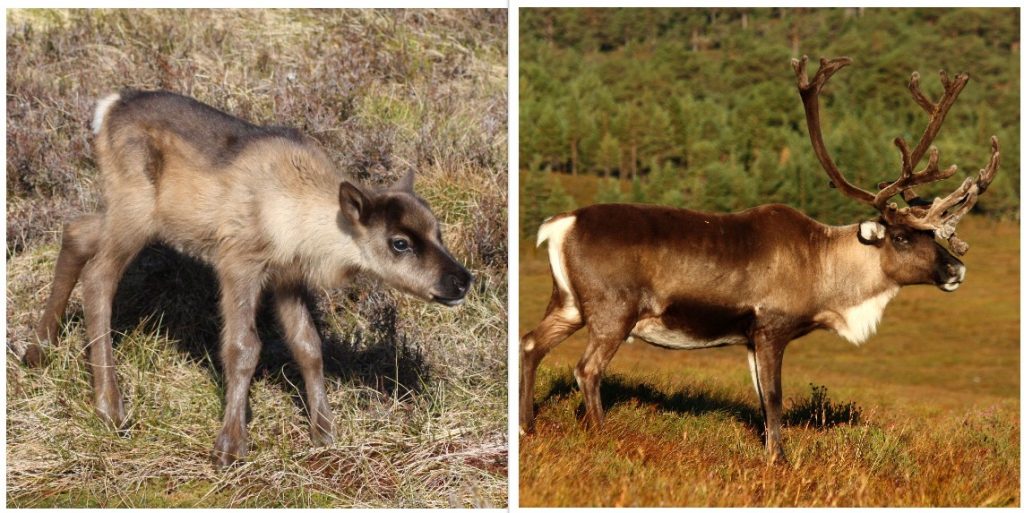 ‘Chocolate brown’ is the next category, darker all over than the others so far. Olympic has grown in to a dark coloured adult, but by no means as dark as they get…. 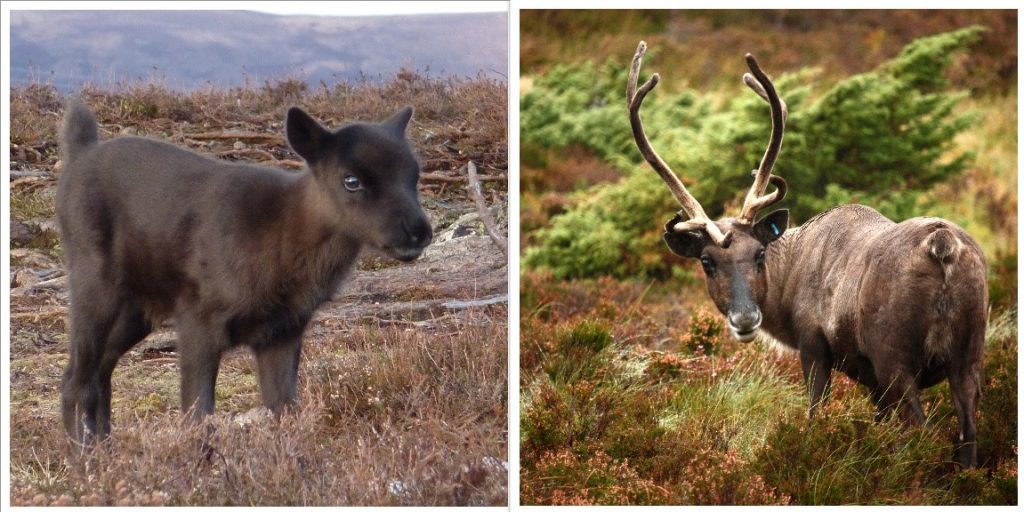 ….unlike Lace! Jet black as a calf, she’s always been one of the very darkest reindeer in the herd. Note how dark her bum is compared to Olympic above! 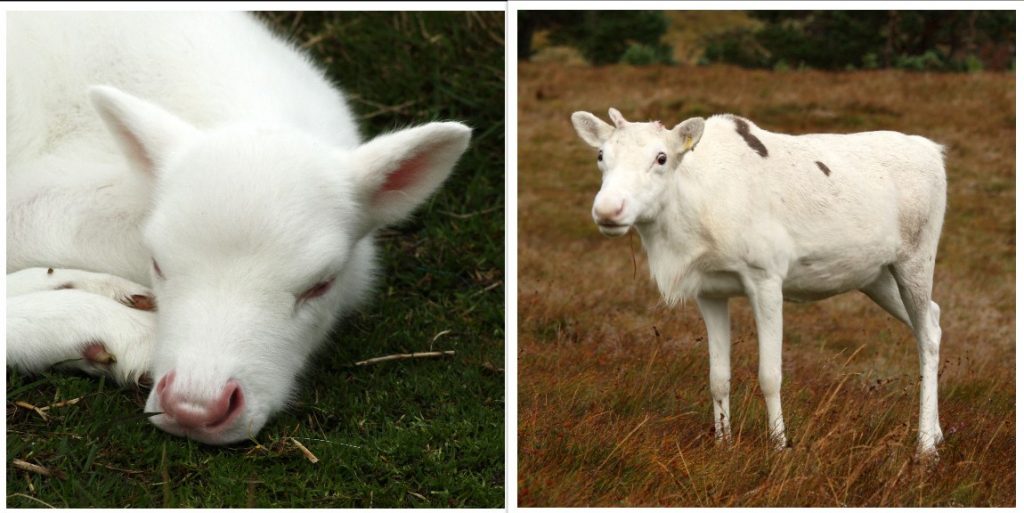 And at the other end of the scale is Mozzarella. If a calf is pure white, whether they are actually leucistic or literally just very white, they will stay that way their whole lives, regardless of the changing of the seasons. Their summer and winter coats are both pretty much the same. Mozzarella has a couple of dark markings on her, and these will change in darkness depending on the season, but not her white hairs.

Olmec and his mum Emmental are both ‘white’ reindeer too, or at least what we would refer to as a white or light coloured reindeer. In August, on the right, (and 3 years later!) they are much greyer, about halfway from summer to winter coats, but reindeer’s coats bleach in the light throughout the winter months, turning them much whiter by spring. 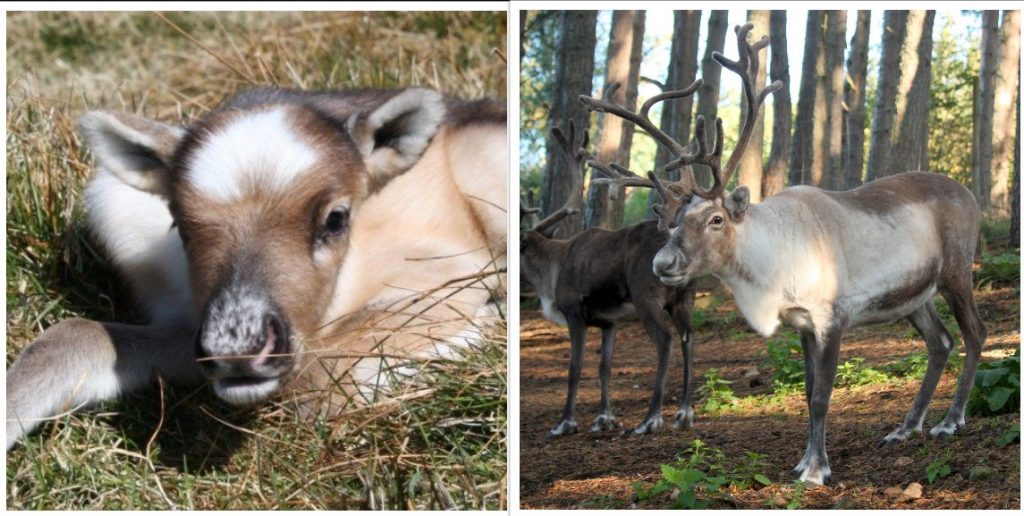 Not all light coloured adults start out light though, as LX and Diamond demonstrate here. White foreheads on a brown calf generally signify a calf will turn white in adulthood though! It’s not a particularly common colouration though – I think these are the only two I remember in my time here (or at least the only two who survived to adulthood – there may have been others). 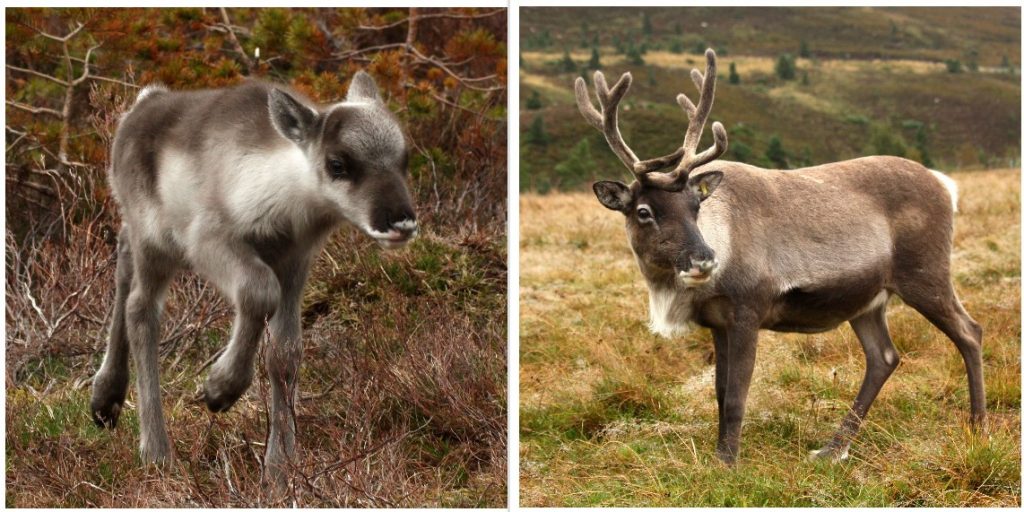 Finally, there’s always one or two odd ones each year. Above is Brie, a sort of slate-grey colour as a calf with a little white nose, but generally she’s pretty much normal coloured now as an adult, albeit still rather greyish. She was a very pretty calf! 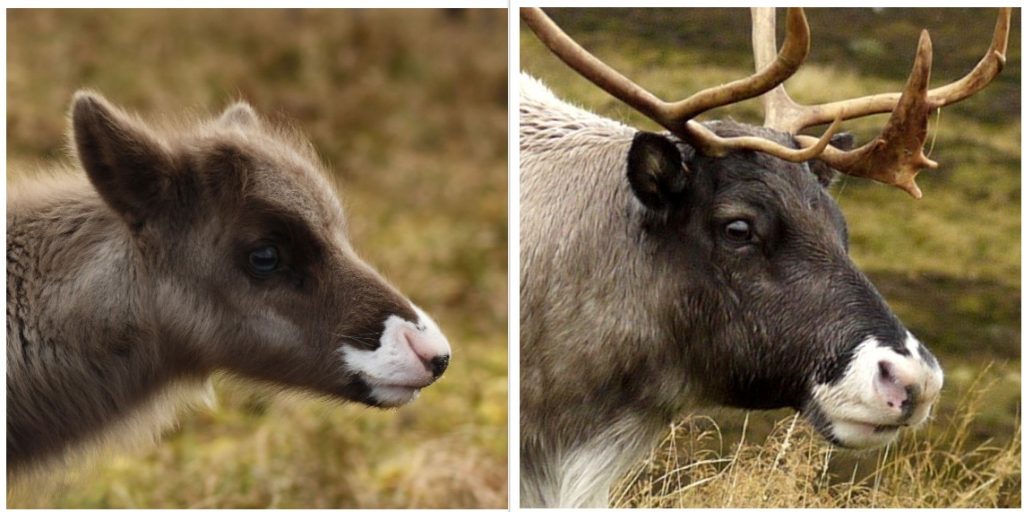 And finally Spartan, again slate grey as a calf but on the darker side as an adult. His pale eyes are a giveaway for his slightly odd colouration though, and as a breeding bull he’s thrown some equally unusual looking calves this spring!

There’s nothing more exciting than walking towards a cow who just calved, having eventually tracked them down – knowing you’re the very first human to lay eyes on that calf. At 8am when reporting from the hill down to Reindeer House, having been on the early shift and out for two or three hours already, I’ve squeaked “You’ll never guess what colour so-and-so’s calf is!” down a phone excitedly many times in the past. Freezing toes, soaked clothes and rumbling belly temporarily forgotten.