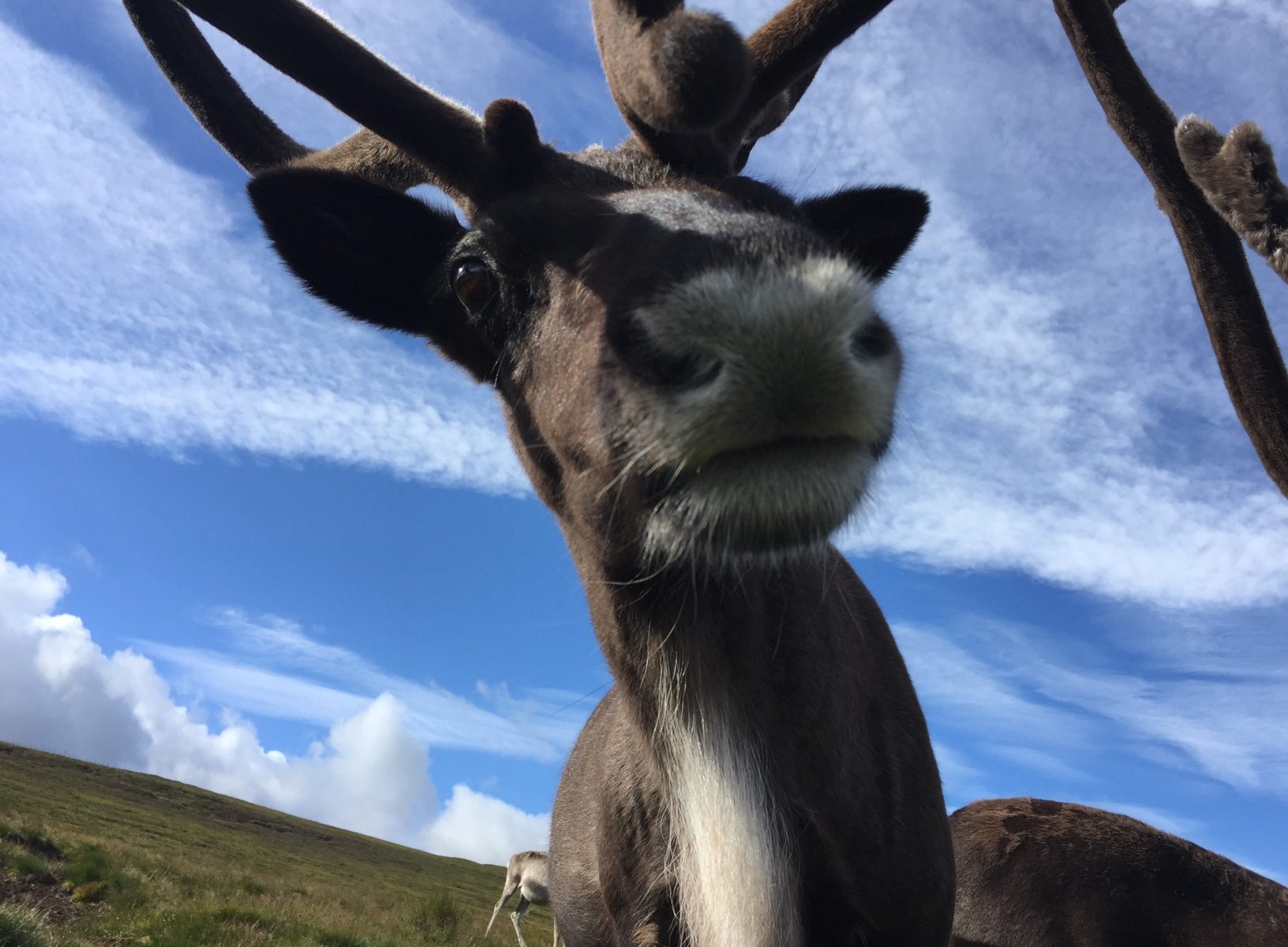 We always encourage questions on our Hill Trips; some are simple to answer whilst others get us thinking more and this particular question even inspired me to write a blog!

The simple answer is… no. Reindeer, like other species of deer, are not colour blind, although they do see the world in a different way to us humans.

If you take a look at the visible spectrum below, reindeer can only see the colours at one end of it. They only see the short (blue) and middle (green) wavelength colours. This means they can distinguish blue from red, but not green from red, or orange from red. Therefore, their vision is thought to be similar to a human with red-green colour blindness.

So, when us Reindeer Herders go out for a Hill Trip wearing our bright red waterproof jackets, the reindeer would think we were camouflaged with the green hillside behind us. And there was I thinking we stand out!

To get a little bit more scientific this is because humans have three different kinds of cone cells in the retina which can detect the entire visible light spectrum. However, deer only have two sets of cones meaning that they cannot distinguish the longer wavelengths.

However, as I discovered this is not the end of the story of how a reindeer sees the world…. fascinatingly, they are one of only a tiny number of mammals which can also see ultraviolet!

Humans can’t see UV light but it is in sunlight so we are exposed to it every day; suntans (or in my case freckling and sunburn!) are familiar effects of our exposure to it!

So this led me to ponder the question “why have reindeer evolved to have UV vision?”

Researchers think that reindeer have adapted to see in UV as they live in a very UV-rich world. It’s thought that snow reflects around 90% of the UV light that hits it, compared to snow-free land which usually only reflects a few per cent.

Therefore, reindeer have adapted to their white world and have taken full advantage of it! Their special ability to see in UV allows them to spot things that other mammals would miss and helps them to find food and stay safe.

In the frozen white Arctic where the vast majority of the landscape would reflect the UV light, there are a few things which would absorb it. Predators, such as wolves, who to us would appear camouflaged actually stand out to a reindeer as their fur (and also their urine – a sign of a potential predator!) absorbs the UV light making them appear dark grey/black against the white, snowy background. Clever!

Similarly lichen, a major food source for reindeer in the winter months, also absorbs UV light. So if there was a tuft of lichen sticking up above the snow it would also appears very dark allowing the reindeer to see it clearly, in stark contrast to the UV-reflecting snow.

Therefore, they can avoid animals which might want to eat them and instead find lots of delicious lichen to devour for themselves!

We’re always getting lots of interesting questions and I look forward to the next one which gets me hitting the books… and maybe even writing another blog!

2 Replies to “How does a reindeer see the world?”