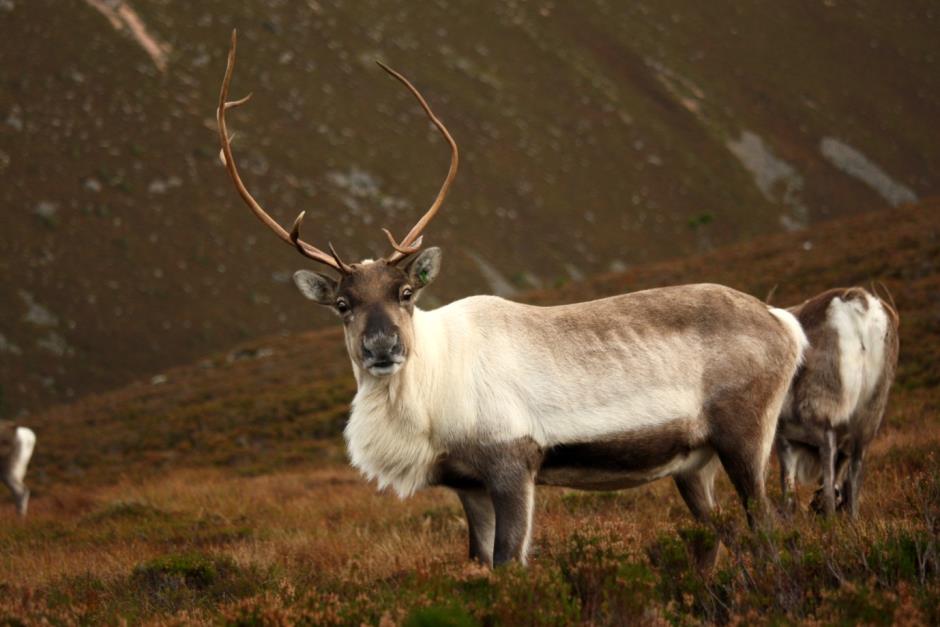 I was inspired to write about Fly as the featured reindeer for this blog as I followed her back from the far end of the hill enclosure with her new-born male calf back in May 2014. Fly’s name has a tenuous connection to the 2007 theme of the colour green: the gardener’s worst nightmare, greenfly. We shortened her name to Fly.

As I followed her through the wooded slopes of Silver Mount Fly led me a tortuous route up and down the hill through deep heather and thick woodland. I’m not sure who she was testing, me or her calf. Her calf was amazing, struggling through the jungle of rank heather, scaling rough boulders and trying to keep up with his mum as she strode up the hill. I had to keep my wits about me as on a couple of occasions she appeared to completely vanish. Fly by name, fly by nature.

There are only a few breeding females in our herd that get the gold star for breeding success and Fly is up there with the best of them. She calved first as a two year old, a strapping female calf who we called Custard (can you guess the link?!). Custard calved for the first time in 2012 then in 2013 she had a beautiful female calf, Cream (clever with linking names eh), so Fly at the age of only five years old became a granny. In the world of reindeer grannies can go on to be mothers too for many years and since having custard Fly has gone on to produce six strapping males: Dragonfly, Domino, Balmoral, Anster, Hudson and Aonach.

Fly is coming up 11 now and having missed out on the rut last year she shouldn’t be calving this year. However, as she’s still one of the biggest and strongest females in the herd it’s possible she may well run in the rut with a male again this autumn if she stays in good health. Fly has maintained a remarkable record of being the first female to come to call every time Fiona has been out to bring in the free-rangers these last couple of months. She is never far from the front of the group when the other herders call the reindeer down but she is always first when Fiona calls!