Some people answer to just one name, others like me have a proper name and a nickname. Although given the name Elizabeth as a baby, I was nicknamed Tiddly because I was the youngest ( and so smallest ) in our family of four children.

Tiddly got shortened to either Tids or Tilly and now many 10’s of years on from being Tiddly I am almost universally known as Tilly, although I do sometimes use my ‘real’ name Elizabeth when I want to sound ‘official’. 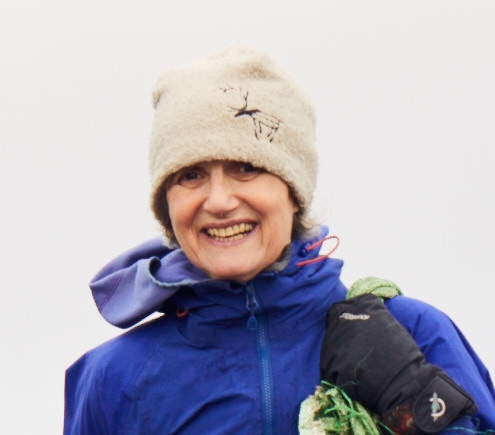 Having two names has worked to my advantage. Many years ago, when I was still organising all the Christmas Events with our reindeer ( thankfully our daughter Fiona does all that now ) I received a phone call from one of our clients regarding their event. After our conversation I said to the Centre Manager, ‘ I am going away for a couple of weeks and so if you have any other queries it may be best to wait till I get back’. To which the lady replied ‘ that’s no problem if you are not available, I will just ask for Tilly!’ I didn’t let on, but was amused that in this Centre Manager’s eyes there was a Tilly and an Elizabeth!

Tilly was not a common name when I was a child but in recent years I have met quite a few young Tillys! I am not someone who keeps up with changing fashions, indeed my mother used to despair of me always wearing jeans and never putting on makeup! But it would seem that I was ahead of the game when it came to my nickname!

As well as other people being called Tilly I have known of various animals with my name. Years ago I was driving up the Ski road from Aviemore back to Reindeer House and there was a chap with his ‘3 legged black labrador’ trying to hitch a lift. Feeling sorry for the dog I drew up and jumped out to let the dog jump in the back. The chap said ‘ jump in Tilly ‘ which rather took me aback before I realised he was talking to his dog!

In the mid 1980’s we became acquainted with a farmer and his wife from Keilder in Northumberland who ran a small open farm. We became best friends and over the years they both looked after reindeer for us at their farm and helped out with our reindeer events at Christmas time. John was a great stockman and could turn his hand to all types of livestock. He acquired some fallow deer and when the doe had her fawn, she wouldn’t raise it and so John and Shirley hand reared the little mite. The wee fallow became incredibly tame and was a winner with all their visitors. I was well chuffed when they announced they had called her, yup you guessed ——-‘Tilly’.

Not only do we name all our reindeer, but we also name our pedigreed Belted Galloway cattle that live on our farm at Glenlivet. When we name our reindeer calves we choose a theme for that year. Last year it was TV/film detectives, before that poets and authors, ancient civilisations etc etc. But with the cattle we go through the alphabet and in 2018 the letter was T. So strangely enough one of our heifers ( young cows ) is called Balcorrach Tilly.

And then today we received an email from a lady in the USA who had recently bought a copy of my latest book Reindeer, An Arctic Life. It transpires that she has a reindeer farm and this is what she wrote in her email:

‘Your book just arrived today and I am only one chapter in, but I already know I absolutely LOVE it. We would be honored to feature this book in our gift shop at our reindeer farm———– Already planning to name our next calf, Tilly.’

So there we go. I don’t think I ever imagined that I would have namesakes that were as diverse as a 3 legged dog, a fallow deer, a Belted Galloway cow and potentially a reindeer. What an honour. And to cap it all, very close friends had a little girl 2.5 years ago and not only did they ask me to be her Godmother but they also named her Tilly!