One day last summer I was leading Okapi and Ryvita from the Cas flats to the reindeer enclosure. I was just about to cross the burn that is crossed by Utsi bridge further down the hill when with one misplaced step I found myself thigh deep in bog. What followed consisted of much giggling (from both me and the reindeer), a serious struggle to get my leg out and a very wet arm having had to reach down into the bog to retrieve my welly. As a squelched my way to the reindeer enclosure I started thinking about the different plants that grow in a bog, especially the indicator plants that could have helped me avoid my rather soggy fate. 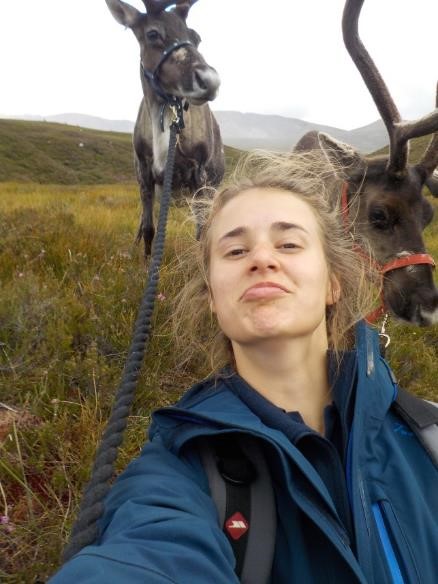 Sphagnum moss is probably the most important plant to look out for. Also known as peat mosses, this group of plants can retain an incredible amount of water (up to 26 times their dry weight). It is so absorbent that it was even used by native North American babies in nappies. This means that standing on this bright green moss (notice it behind me in my bog selfie) will almost always leave you in a similar predicament as I was in. Sphagnum mosses have two types of cells that make up the plant; small living cells and large dead cells. It is the dead cells which have a large water holding capacity. (Disclaimer: if you have no interest in biochemistry then please skip the next sentence or two) Sphagnum mosses are very good at out competing the surrounding plants by carrying out a process called cation exchange, in which nutrients such as potassium and magnesium are taken up and hydrogen ions are released. The increase in concentration of hydrogen ions in the surrounding environment is responsible for making it more acidic and stopping other species from growing there. The acidic conditions along with the layering of the sphagnum produces the peat that we see on the mountains.

Bog cotton is a good indicator of a boggy area as its seed head stick up above the ground and warn you of the wet area beneath. Its white cotton-like seed heads can often be seen bobbing in the wind. Unlike regular cotton, bog cotton cannot be weaved into fabric, however in northern Europe it has been used to produce paper, pillows, candle wicks and wound dressings.

For those of you who have been on the hill trip, you may have seen the yellow spiky flowers of the bog asphodel plant. The Latin name for bog asphodel means ‘bone-breaker’ due to the belief that when sheep eat it then develop brittle bones. However it is more likely that it is correlation rather than causation as sheep eating a low calcium diet are prone to bone weakness and bog asphodel grows in calcium deficient soil. Our reindeer however have no problem getting calcium, as displayed by the wonderful antlers that they grow each year.

The most vicious of all the plants I have described are these two carnivorous plants. They both survive the harsh environment that they live in by catching insects to eat. Sundew catches insects by sensing their movement and elongating the cells on one edge of the leaf and retracting the cells on the other surface of the leaf causing the leaf to curl around the unsuspecting fly. Butterwort uses a different hunting method, the insects stick to its sticky glandular leaves and are then digested by the plant. If you ask me, the plants up on the hill are not working nearly hard enough to catch the midges this summer.