Four pop stars and an Okapi walked into a carpark…

…and no this is not the start of a bad joke but instead a phone call that we get every once in a while from Jamie, the carpark attendant on Cairngorm mountain. At the moment most of the females are in our hill enclosure either because they have calves that we are training and getting used to people, or because they have been running with a bull with the hope they will calve next spring. We do have a few reindeer though who are fully retired and we won’t breed from anymore. These reindeer are allowed to free-roam to their hearts content but seem to keep showing up in various places keeping us busy. I will introduce you to the members of the group, four of whom were born in 2006 and named after pop and rock legends and the final one who was born in 2008 when the theme was horned and antlered animals.

Named after the Scottish singer-songwriter, Lulu is a firm favourite amongst herders; we can definitely all shout about how much we love her. She is very tame and friendly and is the mother of LX who has inherited her greediness. For any of you who have been on the hill to meet the reindeer you may have fed LX as he is often one of the first in line for hand feeding. 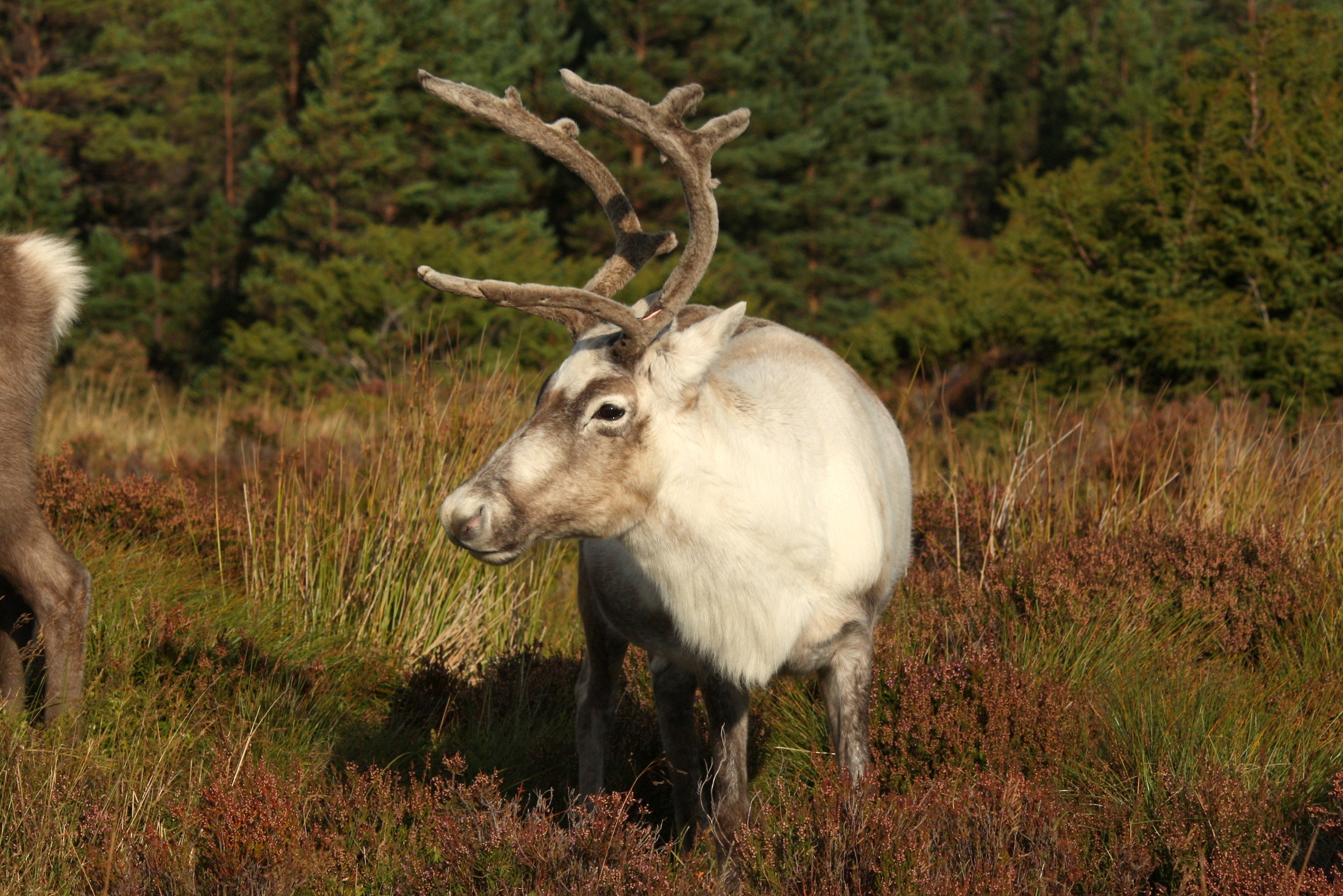 Named due to being totally white, Blondie certainly doesn’t have a heart of glass. Blondie is a leucistic reindeer, a genetic condition that causes a loss of pigmentation and also causes her to be deaf. Blondie is often the last of the reindeer in the group to come for food as she may not have heard us calling. Blondie is also very useful as unless she is in snow, she doesn’t camouflage as well as the other reindeer so she helps us spot the group. 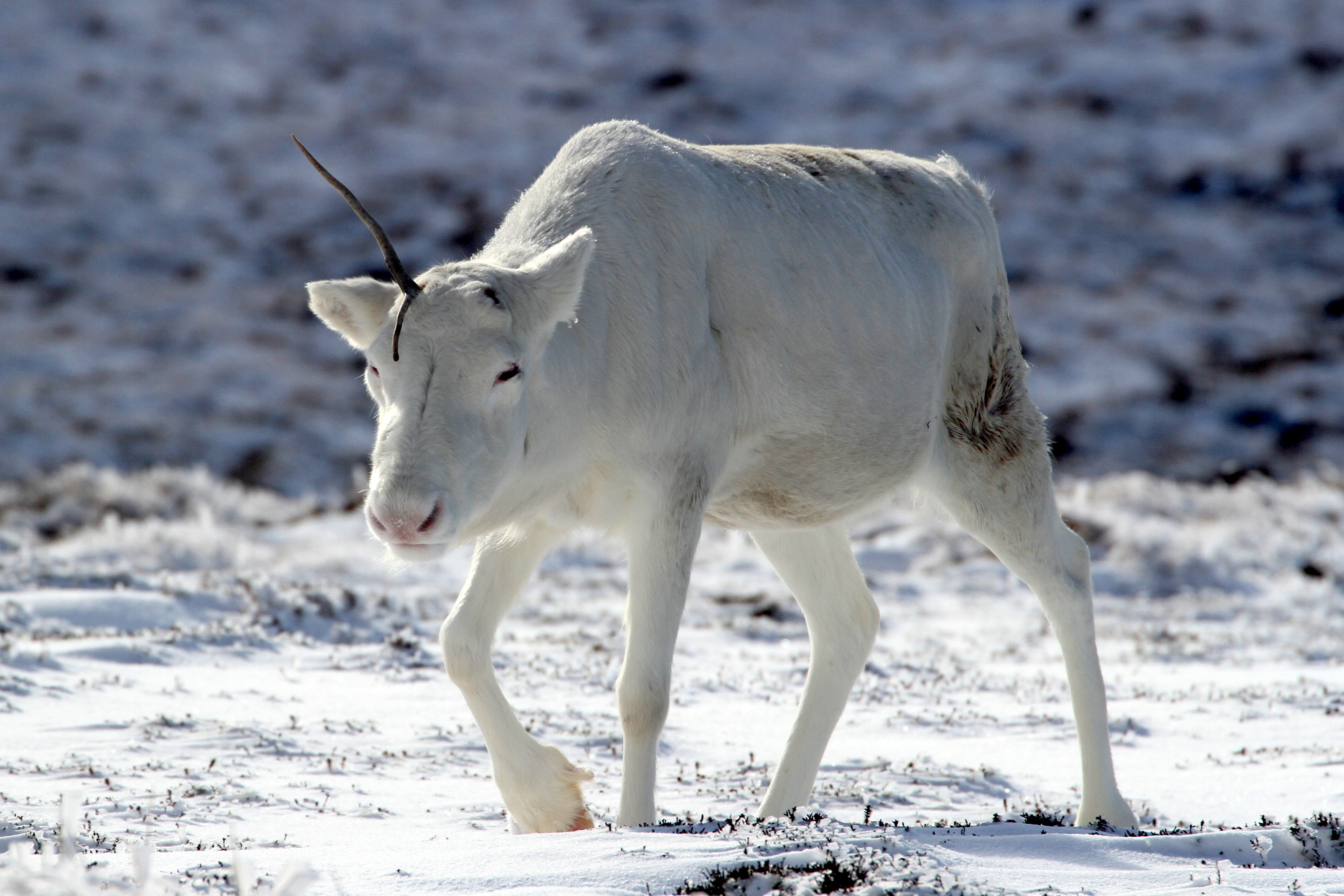 Enya is one of the most independent reindeer in the herd; I’m sure much like her namesake the Irish singer. Recently we have barely had a day without rain but the reindeer don’t seem to mind, being very well adapted for the environment that they live in. Enya always grows a lovely set of antlers. 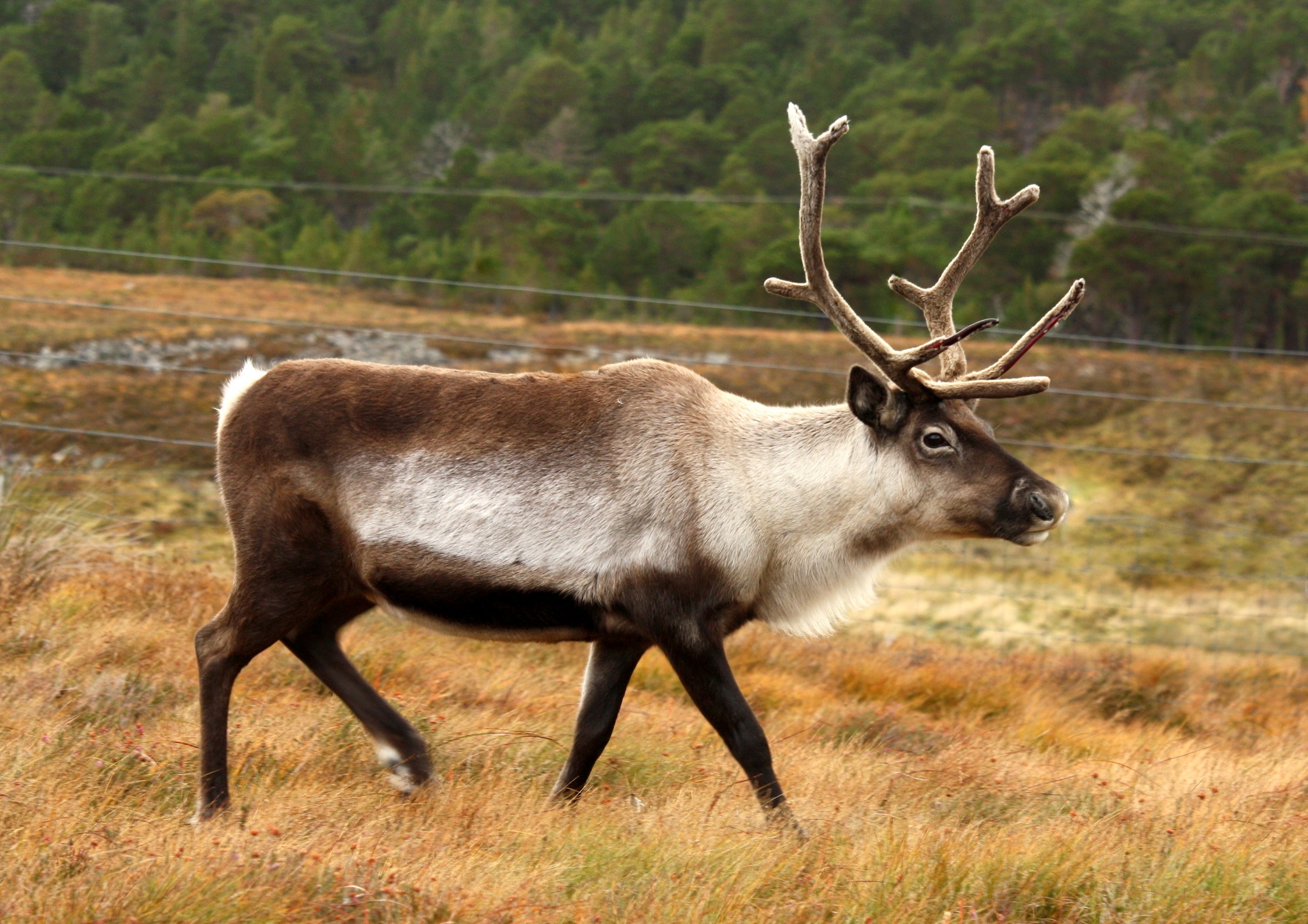 The final of the 4 rock and pop legends in this group is Santana named after the American rock band. Her coat is certainly as smooth as it looks in this photo of her taken last autumn. Santana is the oldest daughter of Haze, who was a strong matriarch in the herd in her day. Santana certainly is no stranger to being amongst strong women with Gazelle, Caddis and Camembert as sisters. So it’s no surprise that she has formed a clear group with these lovely older girls. 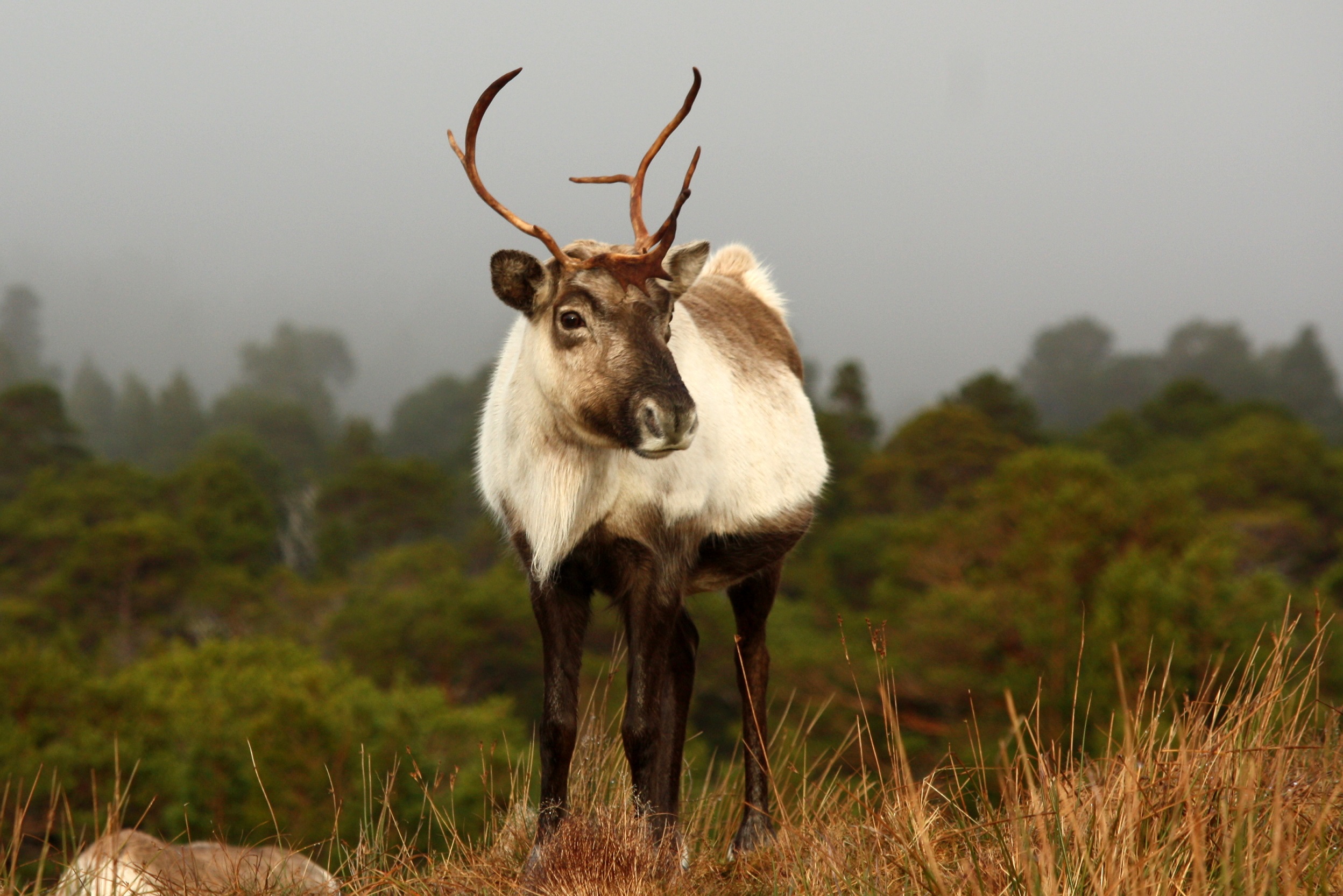 Now last but certainly not least is Okapi, who is two years younger than the others but also retired from motherhood. If you’re not sure what the animal Okapi is named after looks like then definitely google it as they are incredibly cool looking. They live in the forest and are related to giraffes. Okapi is incredibly tame and greedy, and will follow you almost anywhere if you have a bag of feed.

These five reindeer have a collective age of 63 (old enough to get a bus pass) and have been on all sorts of adventures throughout the autumn. We originally brought them into the enclosure as a part of a larger group, the rest of which we wanted in the enclosure for the rut. We then let these guys out of the enclosure to free-range the hills which they did for a couple of weeks, before trying their hand at a bit of reindeer herding. They successfully brought two cows and calves back with them to the enclosure. Cheers girls, thanks for doing our job for us. After the reward of an easy meal we let the girls back out of the enclosure, half hoping they would continue to play the game and collect some more reindeer for us… 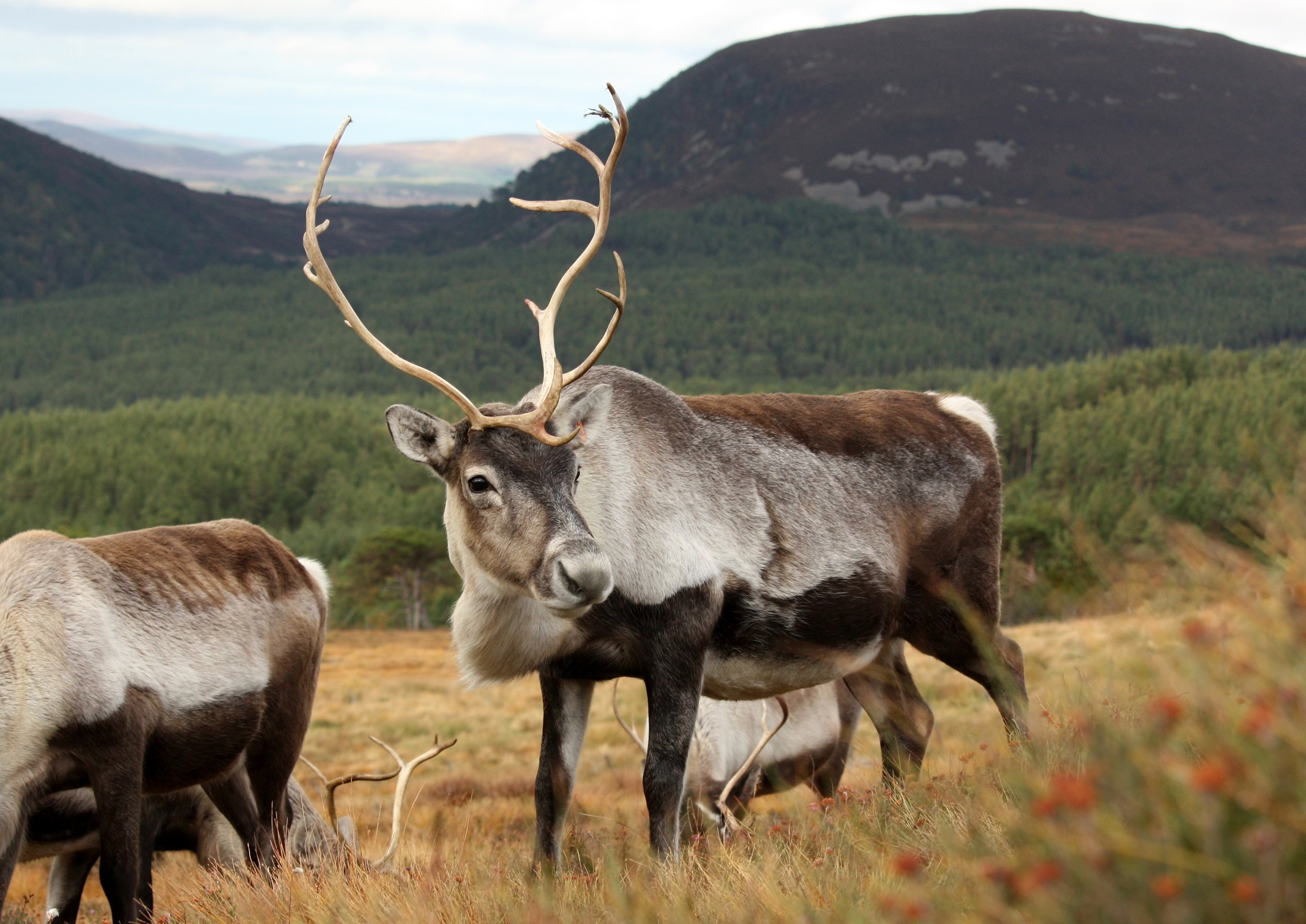