A shortened version of this blog has just been published in our twice annual newsletter, but we didn’t have space to fit the whole thing in, so we thought we’d pop it up as a blog too!

Lockdown was a bizarre and scary period for us all. The term ‘unprecedented’, which I’d rarely heard before, has been used by the news and media every day for months now, and with a lot of uncertainty still ahead, I suspect the word may still be commonly used for some time to come.

But while we were told to stay at home, protect the NHS and save lives, something quite special was happening in Glenmore and indeed the rest of the country. With the lack of people around, for the first time in a long time, wildlife was once again becoming more visible!

For the reindeer here in the Cairngorms, they suddenly had the mountains to themselves and it was great to see them in areas they wouldn’t usually graze due to the number of people around. I even found a Ptarmigan nest with eggs right next to a (normally busy) path one day along with countless raptors seen higher up in the hills, but what I really enjoyed most was the change in wildlife close to home near Reindeer House. We had a visiting roe deer with two fawns outside the house on a couple of occasions; I would regularly see Black Grouse all over the glen along with an osprey fishing over Loch Morlich; and an abundance of other birdlife and the usual red squirrels. However, the animal I have most enjoyed has been the Pine Marten. For those who don’t know, a Pine Marten is a part of the mustelid family, which includes stoats and weasels. They are nocturnal and extremely agile, living mostly in trees and predating on small rodents, birds, eggs, insects and fruit. But what makes them so special is how elusive they are – until this year, I’d only seen a few fleetingly as they ran across the road or a path.

I first discovered they were around at the very start of March – I started to notice my bird food bin (which lives outside my little cabin) kept being knocked over in the night. At first, I thought it was because of all the storms we were having at the time. But on a still night I was woken up by the sound of the bin lid crashing on the ground and to my delight, saw a Pine Marten helping itself to my bag of peanuts. Over the course of a few weeks it became more and more common until by the end of March this became the norm every night. I began to notice that up to 3 or 4 different Pine Marten were coming during the night and my peanut bill was going up!

It was great to start being able to identify the different Pine Martens as I got to know them and see them behave in different ways. Some of the younger ones were very shy and timid while the older larger two Martens were very greedy and would stick about for longer. I did not mind being woken up most nights when they came as they were a great source of entertainment. 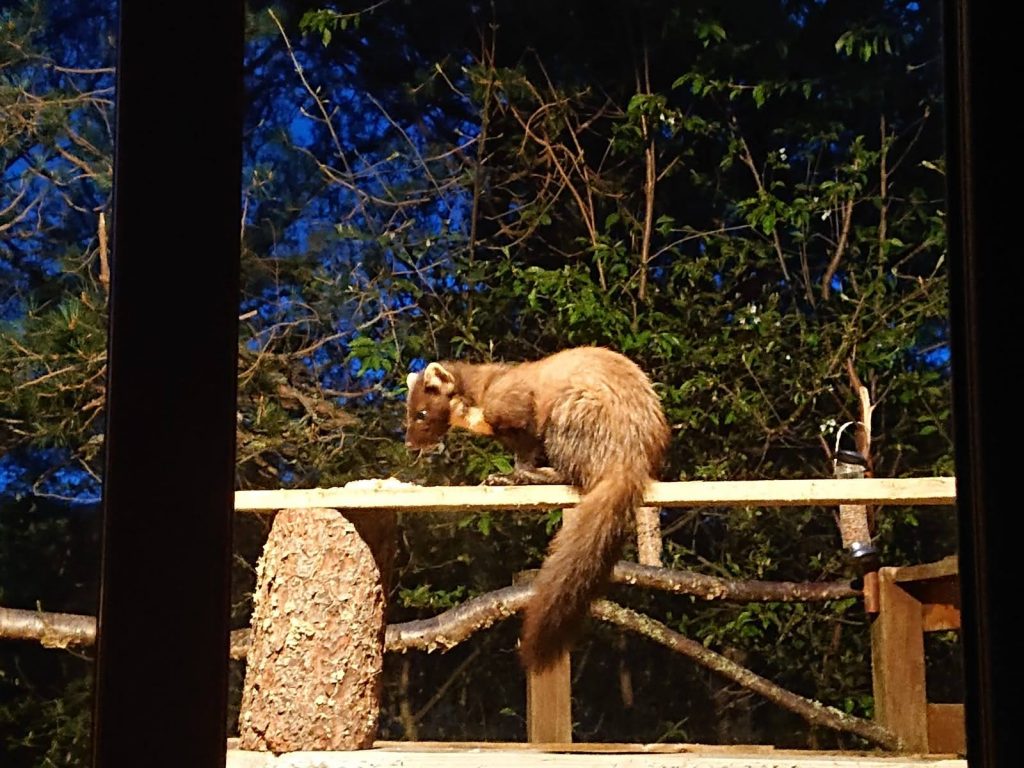 Unfortunately for me, since the middle of summer there has been less Pine Marten action from my cabin due to the abundance of food that they could predate on in the glen. I know that come late autumn they will be back in full force and, fingers crossed, with kits! I’m hoping that from now these furry charismatic creatures will be here to stay at Reindeer House for as long as I am. I feel very lucky and look forward getting to know them even more.

2 Replies to “Pining for a Marten!”