A scenario similar to this one has occurred many times since I came back to work at the Cairngorm Reindeer Herd this summer. In the past blogs have been written about how herders learn the reindeer names, and I desperately read a couple of those in the hopes of finding ways of dealing with all of the reindeer names. People who have worked here for some time seem to be able to recognise a particular reindeer from a fairly long distance or a photograph, whereas I’ve been stuck in the phase of trying to sneak up on a reindeer to be able to read his ear tag number,  after which I can use my cheat sheet to check his name.

To change this the other way around I decided to have a little ID’ing session. Like usual, I sneaked up on a couple of regurgitating reindeer to have a quick look at their ear tag number. I always try to look at the reindeer’s distinct features first, but, to be fair, many look quite similar in the beginning and except from a few very distinct ones it can be really hard to spot something outstanding which tells the reindeer apart from the others. I think I followed reindeer Lomond all the way across the enclosure, trying to read his bloody ear tag number. It’s easier to read when they are eating their food, so while my colleague Hen distributed the food in nice small piles I started to ID them along the line. But, reindeer being animals, they moved about a lot. So it happened a couple of times that I was staring hard at a certain reindeer, hoping for an “aha” moment, not getting one, sneaking around him to check the ear tag number, only to find out I’ve just had him 3 spots back in the line! After going up and down the line a couple of times, with some reindeer encountered at least 10 times and others not once, I decided it was time to call it a day in terms of ID’ing. Unfortunately, as soon as I got back to the centre and looked at a photo I’d made that morning, I realised I couldn’t even identify the reindeer in the photo!! This meant it was time for drastic measures.

ID’ing reindeer is quite important as the first way we know something could be wrong with a reindeer is when he doesn’t show up for breakfast, lunch, or dinner. Reindeer like their food and just like you and me, if they’re not enthusiastic about eating, something’s the matter. It is then the herder’s duty to quickly go over all the reindeer present to check who’s missing. And since reindeer are not like school children in that they won’t dutifully participate in a role call, the best way to quickly do this is to identify each and every one of them by sight as soon as possible. So there you go, the quicker you learn the names, the better.

As a last resort I decided to consult my own knowledge about learning in general. I’ve just finished my English teacher education at uni, so I’ve learned a lot about how people learn and memorise things. One of the ways people memorise vocabulary best is by creating mnemonic devices. One way to do so is to link the word you’re learning (so what it is) to something that sounds very similar to the word. For example, the French word for to eat is manger (pronounced mahn-zhay). A manger in English is a bowl or trough to put animal food in, link this word to the French word (same in spelling, different pronunciation) and you have your mnemonic device. Here are a few of the things I came up with, some of them made my colleagues chuckle..

Lomond (901) – Loch Lomond is the 1st landmark you come across when you walk the West Highland Way.

Olmec (008) – Olmec ate (=8) chocolate (The Olmecs were a Latin American tribe that were the first to consume chocolate!).

Jute (013) – the Jutes brought bad luck (13 = unlucky) to England (the Jutes were a Germanic tribe that invaded England).

Roman (018) – For a lot of Roman stories you have to be 18 or older to be allowed to read them … (The Latin stories about old Rome contain a lot of sexual harassment…).

Now I know most of the reindeer in the hill enclosure! 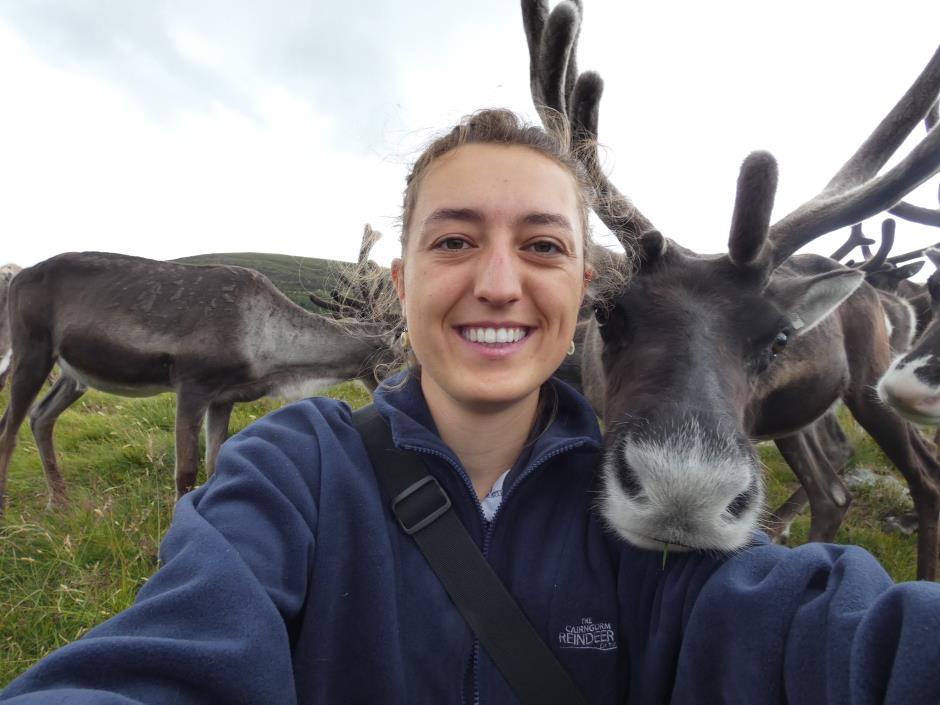 Fyrish and I during a morning IDing session