Mid April here has a definite ‘calm before the storm’ feeling. The area has quietened down as the school holidays have finished and all is peaceful on the reindeer front…but it won’t be for long. At the start of May, all hell will break loose.

Calving is nearly upon us. Although we know exactly which females ran with bulls during the rut last autumn and should therefore be pregnant now, it’s not easy to tell with a reindeer, and it’s really only into April that bellies start looking that little bit more than just well padded. Scanning them like farmers do with sheep is obviously completely impractical, so all we do is to keep an eye on the possible candidates and watch for rapidly expanding tummies. Literally within a couple of weeks reindeer can go from looking exactly the same as their non-pregnant chums, to looking absolutely enormous! As I write, in mid-April, we’re in the middle of that stage, and every day someone will remark on a particular reindeer’s sudden portliness. The weather has finally warmed up too, and with the reindeer still having their full thick winter coats as well as extra weight to lug about, they are looking like they are starting to find it all a bit of an effort, and there’s lots of huffing and puffing when the herd move from place to place.

By the time you read this, we’ll have moved the herd across to our hill enclosure, and will be doing a bit of sorting out. Non-pregnant females will go back out onto the free-range to spend their summer there looking after themselves, while male yearlings will be split from their mums and be moved across to join the other male reindeer at our farm, near Glenlivet. Pregnant females will stay in the hill enclosure until they’ve calved, and then will head out to the hills to join the other females, leaving us to bring male reindeer across to the enclosure from the farm, to duly entertain all the visitors through the busy summer months.

Once bellies give away obviously pregnant reindeer, then the next clue is an udder starting to form. Reindeer don’t have huge udders like cows do, as no arctic animal wants a frost-bitten udder, but instead have much smaller, fur-covered udders and produce smaller volumes of  milk, but much richer in fat than that from a cow.

As many of you probably know, all the staff here take part in a calving bet to pick who they think will calve first. Winning doesn’t really matter; it’s not being last that is most important, as a cold swim in the loch awaits the unfortunate loser (as told by myself and Abby on a previous blog:  The Calving Bet. So from now on until the start of May, there will be a lot of inspecting bellies and peering between back legs to be done…

N.B. Details of which reindeer are pregnant will be kept under wraps by us until our June newsletter for our adopters has been published – so don’t ask us whether so-and-so is due to calve this year! If you recognise a reindeer in the photos above, keep it to yourself… 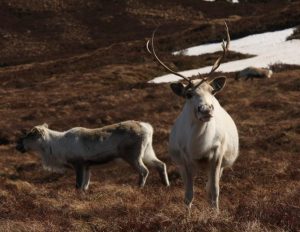