For part two of my Quirky reindeer feature, it’s the boys turn.  Here’s a link to the girls in part one if you missed it last month.

Mr Wonky Nose was born a little bit squint. From when he was a calf Boris has always had a slightly wonky nose. Apparently its from when he was growing in the womb he must have been pushed up against one side, only allowing the other side to grow normally. This has in no way affected him in a negative way, he’s just not the prettiest of reindeer. Though I know lots of people who would argue otherwise so I think in this case beauty is in the eye of the beholder! We have one other reindeer in the herd with a slightly wonky nose and his name is Addja. He joined us from Sweden in 2004 and is now the oldest male in the herd so this shows there is no negative implication.

Where most of my ‘Quirky Reindeer’ stories are of reindeer who have been born with something different, Atlantic fits into this story from something that happened to him a few years ago. He has always been one of the biggest reindeer in his year, growing lovely antlers and always in fantastic condition. Two years ago, while out on the winter free range on the Cromdale Hills we were catching up and checking the herd and found Atlantic with a very sore foot. It was so sore he couldn’t put any weight on it at all and he was going around on three legs. We immediately took him off the hill to our farm to treat as we didn’t want to risk losing him out there. The vet came numerous times to check him over, we administered various different antibiotics and cleaned his foot trying to get rid of the infection, however, the infection was so bad and right up in the joint of his toe of one of his front hooves that nothing was working. Having done our best his foot still wasn’t getting better so our local vet suggested we remove his toe. He said he has done this on cattle before and being cloven hooved (two toes per foot) they get by fine with just one toe. So it was decided, we would remove one of Atlantics toes and he has never looked back. In 2017 he was one of our main breeding bulls and he remains one of the biggest in his year. It just shows how animals, and humans, can adapt to a new situation and their quality of life doesn’t need to change. 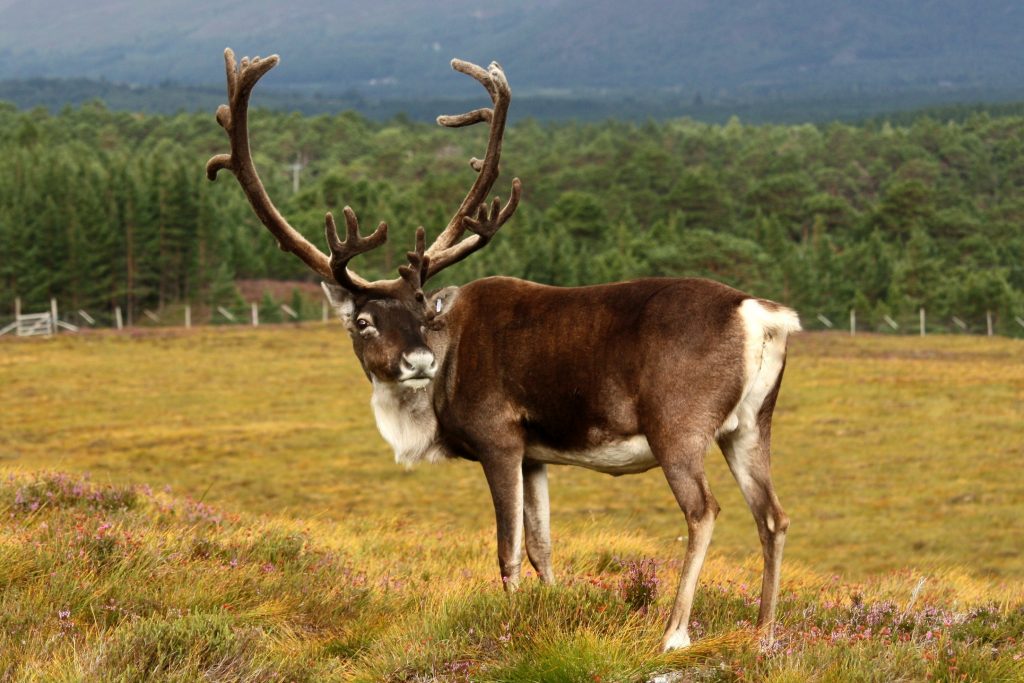 As a calf Merrick came back from free ranging on the Cairngorms with his mother, Nepal. The calves only have very small antlers at that age and in Merricks case he only had a little stump on top of his head. It wasn’t until a year later, when they grow their antlers between March and August that we realised Merrick’s quirk! He only grew one antler! We have seen this before but only in female reindeer, never in the male reindeer. In fact Dixie a 12 year old female only grows one antler and also Brimick, a female reindeer the same age as Merrick only grows one antler as well as reindeer from the past – Ferrari, Cherry and Walnut. This is the first time we have seen this in a male and now he is 3 years old he looks rather silly just growing one antler. The female reindeer don’t grow antlers quite as big as the males so who knows what size it will get to. Will it only grow the same size as a normal antler or will the growth of two antlers go into the one… We have no idea?!?! Even though he grows just the one we still see him tapping the top of head where the other antler should grow so maybe one day, if he taps enough, he might grow another antler… Watch this space!

No doubt you will all know about the twins by now and how rare it is within reindeer to have twins. In May 2018 we had our first pair of surviving twins, Starsky and Hutch. Their mother, Lulu, was an older female and seemed to take them on no bother at all. Like human twins, although they looked quite similar their characters were completely different from one another – this isn’t something I can necessarily describe in writing but when us herders spend everyday with them and we get to know their characters inside out we can tell that the two of them were very different. Sadly we didn’t get the many years of enjoying them together as we lost Hutch very recently, at 4 months old, but it was first for the Cairngorm Reindeer Herd and very rare in reindeer herds across the world. Our attention will now be focused on looking after Starsky.