First off, I’m not talking about the reindeer in that heading. Reindeer only fly at Christmas time after Santa has given them the magic powder and our lovely reindeer don’t attack.

I am of course talking about the flying mini beasts – flies, bugs and, the worst of the worst, midges. Scotland wouldn’t be Scotland without those little terrors, and they are a sign that summer has finally arrived here in Cairngorm, but they aren’t my friends. 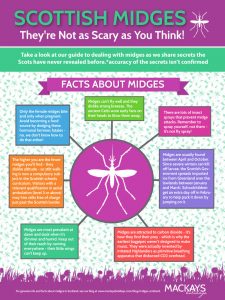 No one here likes the midge, including the reindeer. With the heat rising above 20°C and them still having some of their winter coat, our boys are feeling the heat. In hot weather we often give them access to the shed to hide from the heat – you’d be amazed how many come running out at feeding time.

They are also bothered by the flies and midges, but there’s not much we can do there. As much as I’d like to eradicate midge for both my own and the reindeer’s comfort, they are an important food source for birds, toads and frogs, and bats.

Our boys cope with the midges fairly well; in the paddocks they hide under our shelter shed and up on the hill avoid stagnant pools where midges breed and shake to get rid of the biting buggers. Sometimes it’s like watching a little reindeer dance: they stomp their back foot a few times, then the other, a little shake, a few more stomps, and then if the midges are really ferocious, they’ll burst off in a sprint, jumping and kicking the air. It’s quite funny to watch!

We also spotted Oryx doing something a bit odd. It was the end of a visit, and we were heading to the gate to leave the enclosure. A few boys followed us, no doubt thinking there’d be more food. There’s a large mud bath just at the gate, which usually the reindeer don’t bother with, but this time Oryx got into the big puddle and just stood there. He seemed pretty content, so he was left to his own devices while Fran and I did some poo picking (the glamorous lives we lead). Eventually he decided his spa treatment was finished and got out of the mud bath. He looked ridiculous with mud socks up to his ankles, but he seemed pretty happy with himself.

It’s known that red deer wallow, or bathe in mud, but the cause for this is still unknown. Some think it may be to reduce ectoparasites, while others believe it is to cool down. I’m not sure it’s ever been recorded in reindeer before (a quick Google search didn’t come up with much) but I think Oryx may have been trying to avoid the midges biting at his legs. Either that or he fancied a quick mud treatment at the ‘spa de le Cairngorm’.