Finding the first calf of the year 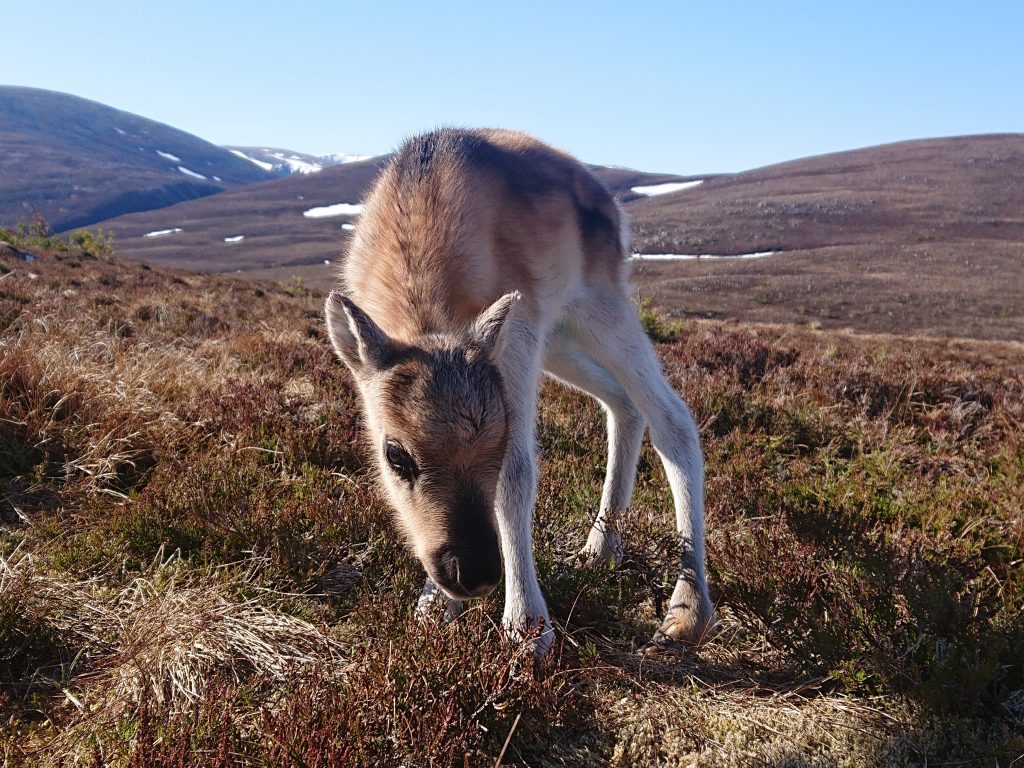 On Saturday the 25th of April, me and Fiona headed off around the enclosure to look for Galilee who was the first reindeer who had headed away from the herd to calve. It was much earlier in the year than the previous year, so I didn’t get my hopes up too much in case she was just ill or being a loner – Galilee can definitely be known to wander from the group. As me and Fi rounded the top of Silver Mount we caught a glimpse of Galilee, licking the ground. Fiona told me that this was a sure sign of her having calved, and as we got closer I could see the tiny calf on the ground. A new-born calf is barely recognisable compared to the calves I had seen previously in the summer and I can honestly say that Galilee’s calf is the most perfect thing I have ever seen. Galilee let us catch the calf and Fi show me how to treat the calf with an insecticide and some antibiotic spray on her navel. Galilee was very good but she clearly want us to leave her to bond with her calf uninterrupted. So we then fed Galilee and left them too it. The weather was even warm enough to cool off (and calm down from the excitement) with a quick dip in our own ‘private’ loch in the reindeer enclosure. 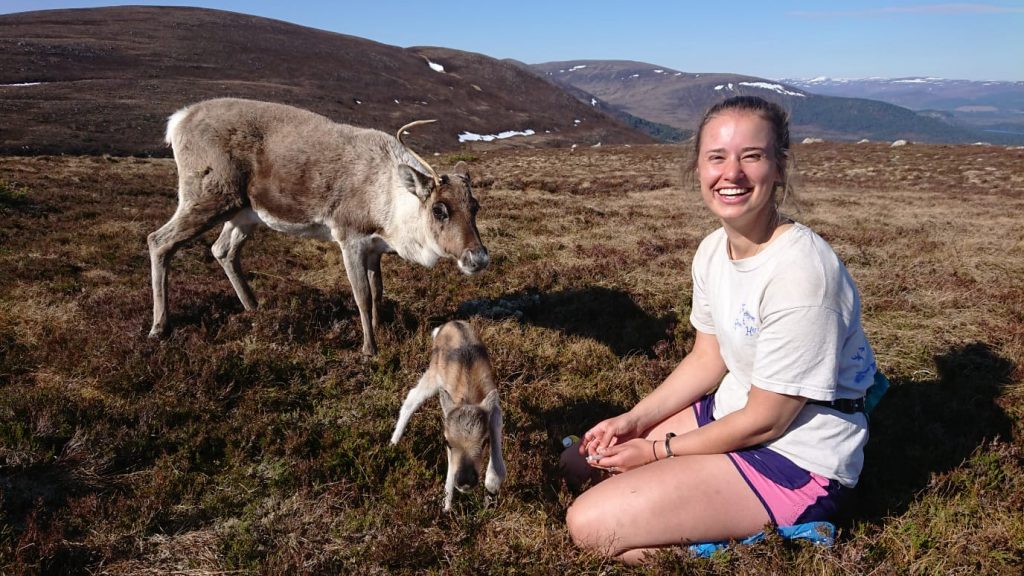 My second favourite calving memory has got to be watching Brie calve. One morning Brie was missing from the herd, from spying through binoculars we  saw her but couldn’t tell if she had calved yet or not so I headed out to go and check. Once I got closer I realised that she had legs actually coming out of her back end – she was midway through calving. I sat down a little way away from her and watched the whole thing through binoculars. I watched the calf take his very first, incredibly wobbly steps and have his first milk.

Another favourite calving moment for me was finding Gloriana’s calf. Gloriana is an 8-year-old female who had previously never had a calf. I really fell in love with her during the 2015 rut. She was amongst a group of reindeer on Silver Mount however she was a bit of a loner from the group and used to sometimes follow me away from the herd once I had finished feeding them. Having never had a calf, we thought that she was infertile so imagine my delight when she started to develop an udder, the first sure sign that a reindeer is almost ready to calve. On one very wet and rainy day, Gloriana was missing from the herd. Andi and I headed out around the enclosure and found her on Silver Mount with a beautiful big male calf. Gloriana was a wee bit nervous but let us treat the calf with no problems. The next day however when we tried to bring Gloriana and her calf to a closer section of the enclosure, I couldn’t get anywhere near her. I think having a calf for the first time at 8 years old made her a bit of an overbearing mum, so it took us a couple of days to get near her again. She did eventually settle down and both her and her calf became more and more confident during the time they were in the enclosure. 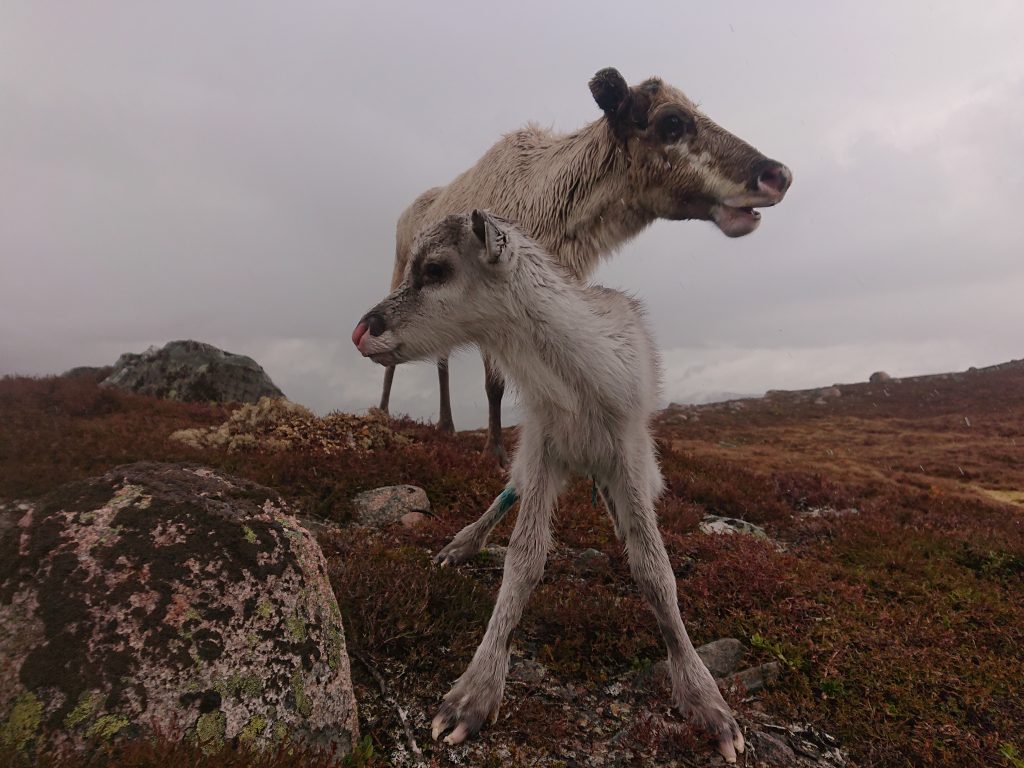 Hanging out with an experienced mum

Okay so this calving favourite is not just one moment. A couple of times during calving I got to go out and find a cow and calf from a very tame and experienced mum. Usually once we find the calf we will catch it and treat it and then leave the cow and calf as soon as possible to make sure that we don’t upset the mum. However, some of the cows have had so many calves and are so used to people that they are perfectly happy to lie down with you and their new-born calf. The new-born calves are incredibly inquisitive and totally unafraid of humans. It is a really wonderful experience just hanging out with the new-born calves and their very relaxed mums.

Sending the calves onto the free-range for the summer.

My final favourite calving memory was letting the calves onto the free-range for the summer. We walked out of the enclosure with some of the cows on halters and the rest following towards the hills. Having spent every day of the last 6 weeks or so with the cows and then the calves, letting them go onto the free-range for the summer where we would likely see them every couple of weeks at the most was both sad and wonderful. Definitely sad to not be seeing them every day but also very wonderful to know that they would spend the next few months of their lives in the very best place for them, the mountains.

3 Replies to “My top 5 calving memories!”