I remember the day Grunter was born. Dixie, his mum was only two years old at the time and rather than taking herself away from the herd to find a nice wee spot to calve she stuck with them and joined in with our daily guided tour. Things all happened very fast for her and before she knew it, mid hand feeding time for our visitors, Dixie popped out a tiny wee bundle which was Grunter! Much to her surprise she really didn’t know what to do next, instinct didn’t kick in and she legged it off up the hill in panic. Sally and Kathleen were on the visit that day so they reported down for a contingent of herders to come onto the hill to help out.

Alex and Emily first came up to help out getting Dixie back and taking herself and Grunter (who wasn’t actually named at this point) back to our shed and penned area on the hill. I then joined them to help get Grunter to suckle as it is very important for them to get their first milk which is the colostrums. This plays an vital part in their immune system at the very beginning but also for the rest of their life! Dixie was extremely unsettled and actively using her feet to shoo Grunter away from her so we had to use a bit of brute force as Grunter needed to get the milk. We also supplemented with some formula from the vet, just in case he didn’t get a full quota.

For the next few days we didn’t want to keep them separate in case there was a small chance Dixie would take to having a calf. We left the two of them up in the penned and shed area for a few days but also went up early mornings and late nights to give Grunter a bottle of milk. It was at this point he got his name as Sally and I were walking up towards their pen one morning and the demanding sound of ‘grunt… grunt… grunt’ was echoing. It was a nickname which of course stuck, as most nicknames do with the reindeer. It became very apparent over the next few days and weeks that Dixie was not going take on Grunter so we decided it was best for her to head for the summer free range with the other cows and calves and we would hand rear the wee man ourselves.

Another few days passed and then we sadly lost a female called Maisie who had a female calve of 10 days old so now we had two! Its unusual enough having one, let alone two to hand rear in one year, we were left well and truly holding the babies… We named her Hippo as she was as hungry as a hippo when it came to giving them their bottle of milk. The two of them were thick as thieves however it was definitely Hippo leading Grunter astray, he would follow along like a lost little brother. Everyday they would go up and down the hill with us spending the day up there and then back down to our paddocks here at the Centre at night. Not only did we have two reindeer to hand rear but we also ended up with two red deer (from our Glenlivet farm) to bottle feed so it was a right wee crèche out there.

As always they grow up far too fast but it was such a great summer with them.  They were full of fun and mischief. Usually reindeer wean off the bottle of milk round October time but Grunter (not Hippo) was very much still enjoying his bottles of milk right into December and even had them while out and about on Christmas events. As a teenager Grunter was a bit of a handful as he loved jumping on people. He has managed to include most of us reindeer herders in that too. Reindeer herder Anna will remember Grunters hooves reaching her shoulders in the paddocks and I remember once I was calling the reindeer down and Grunter decided that was his time to pounce (literally) therefore during those younger years Grunter was sent to the farm for the summer months where he couldn’t pick on the general public… or reindeer herders! However he did mellow when he got to about 3-4 years old and he turned into the most amazing reindeer – he didn’t have a malicious bone in his body. 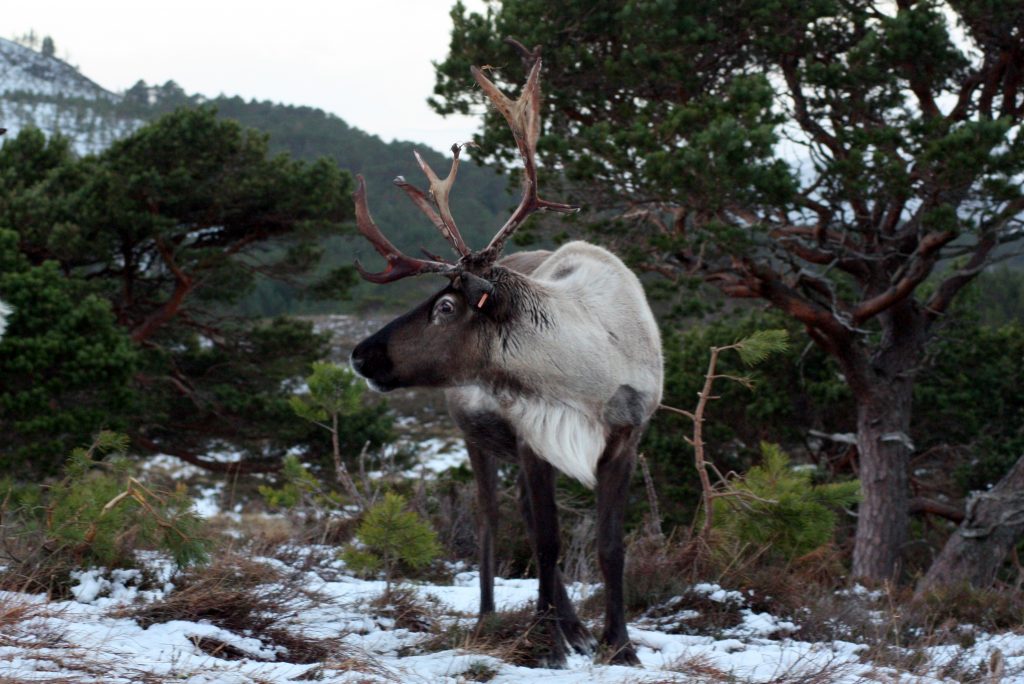 When out on Christmas tour I have taken him into old peoples homes and children’s hospitals where patients have been bed bound. The delighted on their faces to meet Grunter was priceless. We went to visit my Grandpa when he was fairly frail at his home on the south east coast and we got Grunter right in his conservatory to meet and greet, needless to say my grandpa was delighted! I have had very young children lead him around as he is totally trust worthy. Candice and Pandra (long term supporters of the herd) will have fond memories of Grunter on tour, I think he was a bit of a guardian in the pen when little Pandra would walk round, the other reindeer wouldn’t give her a hard time if Grunter was by her side. That was the only slightly naughty thing about Grunter, he was so tame and used to humans that he didn’t think twice about giving the other reindeer a bit of a hard time… or was it keeping them in check within the herd, not sure. When we stopped at service stations to fill with fuel Grunter would make himself known by ‘grunting’ to seek a bit of attention, which lets face it if he was in my team he always got… I did spoil him rotten! 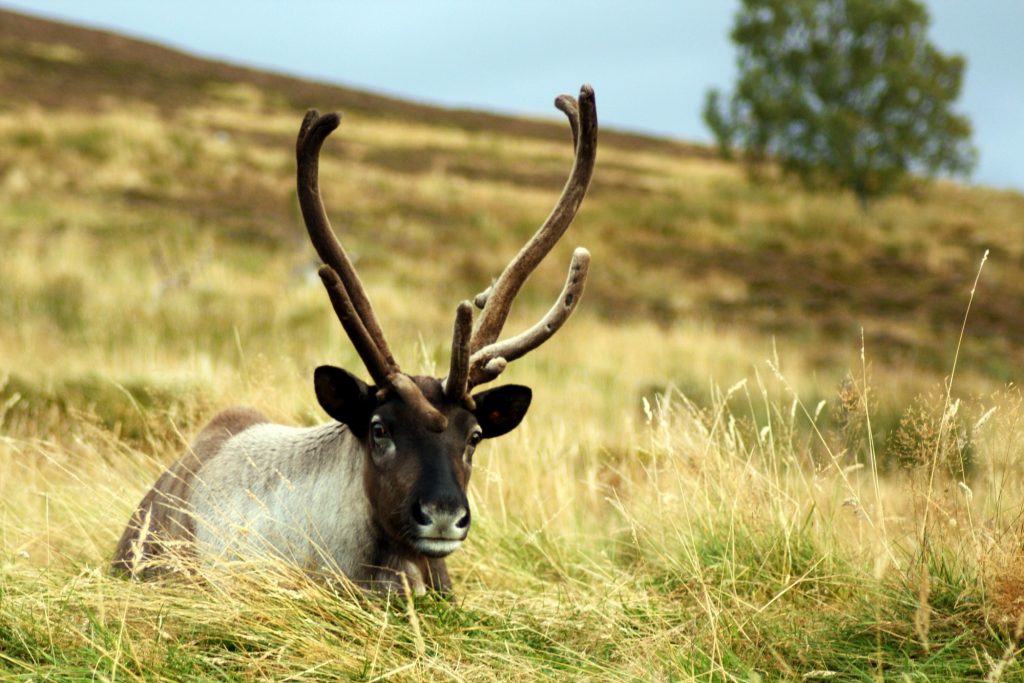 When back at home he was always used as a role model, whether it be training new reindeer to pull the sleigh, to lead the herd in or moving them round on the hill side. When loading into the livestock truck Grunter wouldn’t even break his stride to go up the ramp which showed how comfortable he was and gave the younger inexperienced reindeer comfort in travelling. He definitely had a cheeky side though and sometimes when pushing the herd in Grunter would leap around dancing and refusing to go through gate ways… he was playing like a naughty child and avoiding doing what we wanted him to do because he knew us so well.

Grunter died almost exactly eight years to the day after he was born. He was over at our hill farm having spent the winter free ranging on the Cromdale Hills. Over the past year he hasn’t seemed to put on weight quite as much as we liked however spirits were always high. His last night with us Tilly shut him in so he could get a good pile of lichen to himself and as she left she just push the gate to, not latching it shut. In true Grunter style he finished up the yummy stuff and then pushed his way out the pen. He headed to the top of the hill beside a birch woodland and that’s where he died. Tilly found him in the morning so we buried him up there in the woodland with a good view of the Cromdale Hills. We suspect his shortened life may have been from not getting the best start to life in the first place and maybe not having as strong an immune system, but this is just speculation, maybe he had something underlying that we didn’t find. The main thing was he was never in pain or horrifically ill, he was the same old Grunter from beginning to end.

Reindeer like Grunter are rare and he has no doubt crossed paths with many of you whether it be here at home in the Highlands of Scotland, out and about on Christmas tour, or both! Feel free to write your story / memory of Grunter and lets share the antics of this amazing reindeer!

One Reply to “Grunter, The Monsterful”