At the start of August, Lottie and myself were sent out into the mountains to see if we could find the free-ranging females and their calves. Fiona had spied a big herd from the road and thought it would be a good idea to get them to follow us for as long as possible with a bag of food, in preparation for the rutting season where the females will need to be led back into the enclosure. With our lunches packed and a bag of feed each in our rucksacks, Lottie and myself set off for a day searching for reindeer.

At the Ptarmigan restaurant, at the top of the funicular train line, we were rewarded with the sight of a large group of 20 females and two calves. Three females immediately ran over as soon as they caught sight of us removing a feed bag from Lottie’s rucksack. These turned out to be Hopscotch and her yearling Kipling. Hopscotch’s three-year-old son, Kips, is a regular on the handfeed line on hill trips and it was easy to see where he had inherited his greediness from! The third was a little reindeer called Pagan who proceed to half-heartedly shake her antlers on our legs in an effort to receive some food.

With Lottie leading and myself following at the back, we managed keep the females as a group and walking for a good half hour around the plateau. We gave up when the herd started to trot off in all directions and no amount of running behind in zigzags would keep them together. We had just made the decision to put the feed out, when Lottie looked behind and discovered another large group of twentyish females had joined us! After putting a long line of food, we counted 43 reindeer in total.

Once everyone was fed (including ourselves), the reindeer trotted off as one big herd, moving quickly across the mountain which was amazing to watch. Lottie and myself then headed to the summit of Cairn Gorm and around the Northern Corries in the hope of finding another group. Unfortunately, we spent the rest of the day searching for reindeer to no avail. We did however, have the most amazing day walking around the mountains, in shock the whole way that we were getting paid for this! I often have people telling me on hill trips that I have the best job in the world, and after this day out in the mountains, I would find it hard to disagree with them. 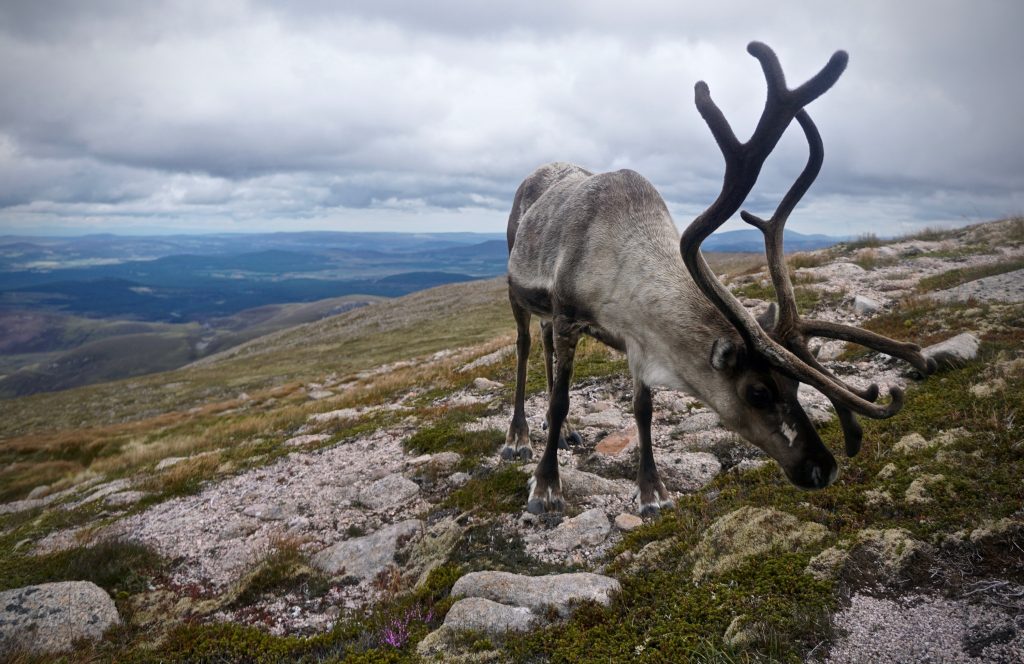 My first time meeting Fly. Her antlers were incredible with one side towering over the other. Apparently she lost one of her antlers a lot later than the other, causing the missmatching in their size.